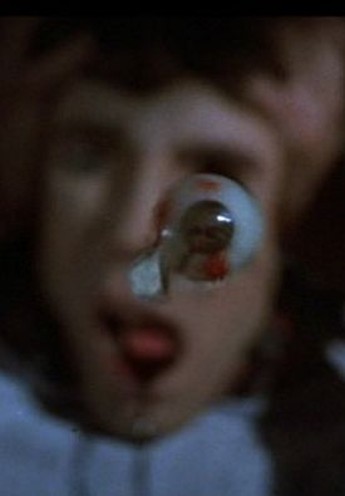 The hockey mask finally shows up here, hooray; it’s taken from the body of a victim, whose idea of “fun” is to meander around pretending to have been attacked. No prizes for guessing how that ends. Anyway, this one was shot in 3D, and it’s painfully obvious, from the opening credits on, where they decided to have things coming out of the screen at the audience. An early shot with a clothes-pole, and a later one with a yo-yo are the most cringeworthy, but far from the only ones. Anyway, plot-wise, it takes a little while to get going, by the time we have the obligatory flashback to earlier events, and then a sequence – far longer than necessary – where Jason steals some clothes from a store and kills the owners. After that, we get to the real meat: another batch of horny teenagers, heading off for a weekend of fun, fornication and fatality. And nothing, not a bum lying in the middle of the road clutching an eyeball, or an irritable trio of bikers, is going to stop them, dammit. Needless to say, Jason has other ideas on the matter, with a range of kills designed, it would appear, to make the most of the 3-D technology.

That gimmick aside, I wasn’t impressed with this. As noted above, it takes too long to get going, despite a TV in the early sequences breathlessly recounting the events of part 2. It doesn’t help that two of the “teenagers” are a couple of stoners, who are so obviously not teenagers, that it feels more like an episode of To Catch a Predator than anything. It’s also an astonishingly-badly written script: not that the first couple were Shakespeare, but they didn’t require the absolute idiocy needed from the characters here. Another review summed that aspect up best: “How the hell does one climb into a hammock while failing to notice a longitudinally split corpse hanging from the ceiling above and a 240-pound serial killer crouching under said hammock with a hunting knife below?” I’ll just add that the victim in question must be really keen to read that copy of Fangoria. While we now have all the elements in place, it’s clear that all the imagination and thought here went into the kills, and the rest of this is so badly assembled as to make it a struggle to avoid unconsciousness.

Body count: 12 (excluding reused footage). Best kill: I’d go for the spear-gun to the eye-socket, which must have been an impressive moment, especially in 3D. However, the one whose skull is crushed until his eyes pop out deserves an honourable mention, and getting cleaved with a machete while standing on your hands? Ouch.