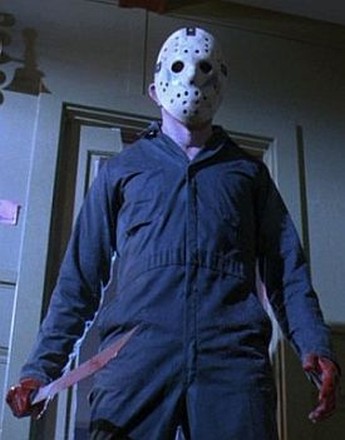 Once you get to the end, it becomes clear that this is a fraud, despite an opening which seems to suggest Jason coming back to life [though that illusion was dispelled for us immediately we realized he had apparently been buried with both his mask and machete!]. Turns out this isn’t the case, and while there is an explanation given for what happens at the end, when I look back at the carnage as it unfolded, I can’t say it makes a great deal of sense. There are too many people killed for no reason – when you’re dealing with a deranged, apparently immortal psychopath, you don’t really require motive, but if that is no longer the case… Well, let’s not go any further into that, for spoilerish reasons. Beyond this, admittedly fairly-large, issue, everything else is more or less business as usual. It appears quite a lot of time has passed, as Tommy from Part 4 is now an adult (Shepherd), though traumatized by events, has been shipped off to a funny farm for rehabilitation. When one inmate murders another with an ax (I must say, handing such things out unsupervised seem a dubious approach to patient care), it triggers a whole wave of slaughter, by a machete-wielding, hockey-mask wearing psychopath.

The film starts by focusing on Tommy and his violent rages – could he be, as the finale of its predecessor suggested, becoming a serial killer himself? However, that aspect is almost ignored in the second-half, building towards a similar climax in which this entry’s final girl (Kinnaman) tries to escape, along with a young black kid (Ross), who manages to prove the horror rule that the black guy dies first, only applies to those over 18. The setting is a little different, and unashamedly non-PC: it’s hardly a sympathetic portrayal of the mentally ill, and some victims here die, purely for that reason. Despite some impressive nudity, and the highest number of kills in the series to date, I definitely felt cheated as the final credits rolled, and that twist was far from the only aspect that fails to make sense; bulldozer-driving lessons appear to be part of the middle-school curriculum, these days. Unimpressive and largely forgettable.

Body count: 19 (excluding dreams). Best kill: these seemed more restrained than in previous entries: was this the hand of the MPAA or the director? There’s a number of credible stabbings, but the only one to deliver is when “Jason” [quotes used advisedly] lands on a bed of spikes.