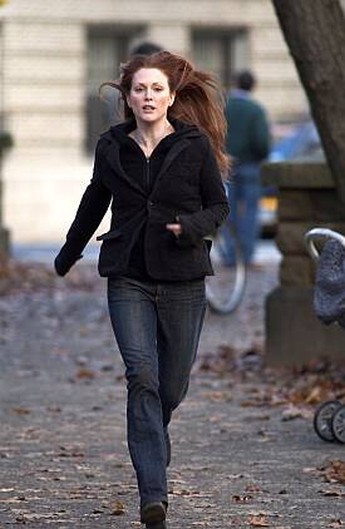 I have come to the almost inescapable conclusion that it is a lot easier to generate cinematic paranoia than resolve it. The X Files would be the most obvious example of the problem, but this shows that it’s an equal issue at feature length. The setup is actually very intriguing: Moore plays a woman coming to terms with the death of her son in a plane-crash, who is suddenly told she never had a son – and can find no evidence that she ever did. Is she mad? Or is there something mysterious, and much more sinister going on? It’s likely giving nothing away to reveal that it’s the second option; unfortunately, as so often, when the “something” is revealed, it’s as likely to provoke laughter as any other response.

Moore does well with what she’s given, especially in the first half, but even she can’t withstand the deluge of awfulness which the script hurls at the screen as things unfold. You will jump – twice – but we’re talking cheap shocks, without any emotional impact, to the extent that I can barely remember what caused them. As a kid, did you ever wake up on Christmas morning, and rush down to open the box which has been sitting temptingly under the tree for the past three weeks…only to find it was actually a new school backpack? That’s the kind of feeling created by this film, which promises much, than delivers a sloppy and half-thought out resolution which I’d be embarrassed to commit to paper. Sometimes, a film’s title is really a gift to a critic; this is one such occasion.