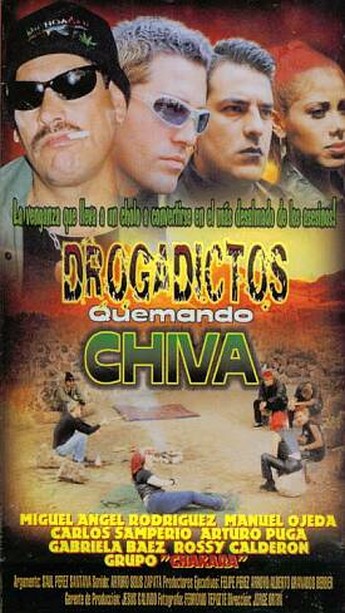 The latest piece of Mexploitation is a poverty-row piece about the perils of gang-life. Our hero Pablo (Rodriguez) decides to leave his criminal life after he and his girl Maiete (Baez) narrowly avoid death at the hands of rivals. Memo to self: if you discover a package of cocaine, don’t seek out the owners and tell them you’re keeping it. However, his former pals, led by a man who looks like Danny Trejo’s big brother, don’t let them escape, and our happy couple are framed for murder: the only way out involves Maiete letting herself get pawed by the local sleazily-corrupt cop. Needless to say, Pablo doesn’t take kindly to this when he finds out the truth behind their mysterious sudden release.

I’m not sure how old Pablo is supposed to be; he looks about 35, but his mother only seems a decade or so older, which makes no sense. Or perhaps they just start young in Mexico. That, and Pablo’s incredible mutating neck-tattoo – never the same in two consecutive scenes! – are good indications of the cheapness on view, but pale beside the “prison”, with sets wobblier than ever dreamt of by Cell-Block H. Then there’s the appearance by musical group Chakara, who make the Village People look like a bunch of Navy SEALS on shore leave. Needless to say, if the quality may be low, the entertainment is worth every penny of the, er, 99 cents we paid for it – probably even if you don’t have a wife who speaks Spanish, and so can’t understand a word.