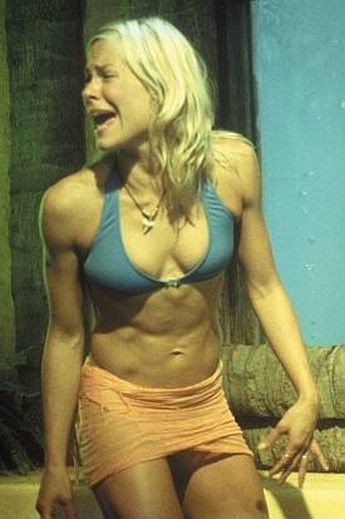 Less the promised spoof of slasher movies, than a rather lame one itself, this trots out all the cliches you’d expect – it just doesn’t do anything very interesting with them. Oh, look: let’s give the tennis instructor dreadlocks – and a posh British accent! Hold my aching sides, for I fear they may split at such comic invention. It actually works better as horror than comedy – not that the idea of a maniac terrorising an island holiday resort is new (see I Still Know…, for example), just that this alleged “comedy” contains startlingly few laughs. The main amusement comes courtesy of Coconut Pete (Paxton), a bitter old singer, deeply peeved that a certain Mr. Buffett ripped off his song, “Pinacoladaburg” – the parodies Paxton sings are spot-on the mark.

Otherwise, it’s a hodge-podge of ideas stolen from scarier and/or funnier films, with few memorable characters, and little invention as far as the actual killings go. While you might not be able to guess who the murderer is, with such bland motivations and characters, that’s hardly much to shout about. Parody needs to be done with either affection or venom, but neither love nor disdain for the genre is on view here – instead, it’s all just relentlessly…bleh. There’s no sense of exaggeration or even a desire to point out how ridiculous everything is, just a rolling out of the same things you’ve seen a million times before and that’s definitely not enough to qualify as “satire”, even in the blandest of Hollywood terms.