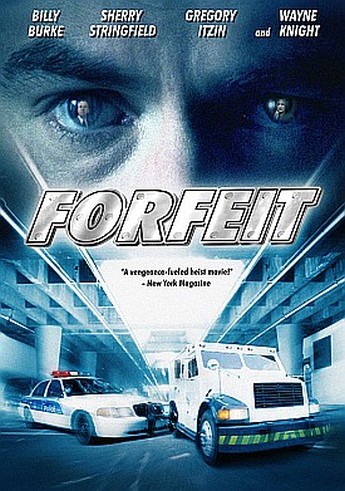 Frank (Burke) killed his abusive father as a teenager, but subsequently found religion, now personified by a TV evangelist (Itzin), whom Burke feels is speaking directly to him. He has now returned to Los Angeles, and his former girlfriend Karen (Stringfield), where he has got a job with a disreputable armoured-car company, who have their own agenda – taking out life-insurance policies on their own employees, with them as the beneficiaries. However, Frank begins methodically plotting towards his own end, tying together the ends of his own burning desire for vengeance, though the foundation on which it lies may not be quite as solid as he imagines. Indeed, much the same can be said for his sanity, as it becomes steadily clearer that Frank is rapidly putting the ‘mental’ back into ‘Christian fundamentalist’.

This is the kind of film where the script needs to be near-perfect, or otherwise the whole thing collapses like a house of cards. In particular, one key aspect is the unavailability of Burke’s dabs: Chris tells me she was fingerprinted after simply witnessing a robbery, which makes me doubt the film’s logic, as Burke is conveniently not checked, under the same circumstances. Outside of that, the rest is put together with some care and decent performances. Itzin is particularly good as the evangelist, though our opinion is likely coloured by familiarity with his role as the sleazy President Logan from 24. The movie succeeds on the purest of terms – you want to keep watching, to see what will happen next. While simple, this is all too often forgotten, making it something of a refreshing change that Shea never loses sight of telling his story.