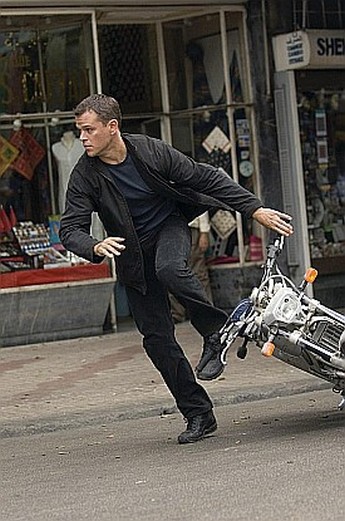 We were so unimpressed by the original, we didn’t even bother with the sequel; however, that seems not to have affected our enjoyment of the third entry at all. It fills in any necessary back-story efficiently enough [not that much is needed] and then hits the ground running, from their whizzing around the globe like a Travel Channel documentary. “Look, kids! Big Ben! Parliament!” Bourne (Damon) is still trying to find out about his past and what made him the perfect killing machine he is now. CIA’s black ops division, led by Noah Vogel (Strathairn), are equally keen for him not to find out, since it appears to violate large chunks of their charter. However, agents with a better diet of moral fibre are (more or less) willing to assist Bourne in his search for the truth. As well as, it appears, a record number of train and airplane miles.

I am reluctant to gaze too close at this, for fear it might not stand up to scrutiny. Fortunately, the pace is so fast and the direction so undeniably enthusiastic [a bit too enthusiastic, when it comes to the editing], that it covers up any holes. My favourite sequence had Bourne contacting a journalist who knew too much to live, and guiding him around Waterloo station, as a stream of CIA assets tried to take him out, but there are plenty of others. Don’t like this bit of action? Don’t worry, there’ll be another one along in a minute, just as soon as we get through another flashback of Bourne remembering bits from his past. This is an amazingly kinetic experience, reminiscent of the best Alias episodes, that grabs you by the adrenal gland and squeezes it gently for two hours. Solid performances back everything up, and while the ending ties everything up nicely, if there is a fourth movie (Bourne Again?), we’ll be there.