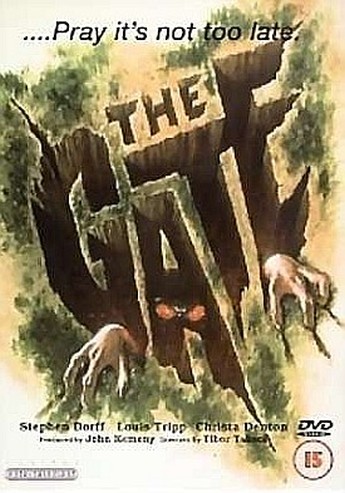 This prime slice of 80’s nostalgia struggles through, past hair-styles best described as “unfortunate” and much sibling bickering, to eventually liven up with a second-half that has some surprisingly-decent special effects. After his parents go away on a trip, Glen (a chubby young Dorff) is basically consigned to pre-pubescent hell – left alone with his older sister, Al (Denton), for the weekend. The only amusement is pal Terry (Tripp), a wannabe delinquent with a taste for heavy-metal, and a large hole in the backyard. Which could quite possibly be a portal through which the Old Gods can return, wreaking havoc and destruction. Or, at least, that’s what Glen is going to have to tell his parents when they come back – oh, to be a fly on the wall for that conversation, which probably counts as more horrific an experience for Glen, than anything he goes through here, up to and including a thirty-foot demonic entity erupting from the floor.

You might be struggling to retain consciousness early on: while the relationship between Glen and Al may be credible enough – hey, I had an older sister – that doesn’t make it something you want to watch, least of all in a horror film. Fortunately, just as I was about to check and make sure this wasn’t The Wonder Years, things start exploding out of the ground, falling out of the wall and engaging in wanton destruction on such a mammoth scale, Glen will be lucky if he is not grounded until pensionable age. Curiously, even a massive, spiraling vortex of demonic suck in the sky above the house attracts no attention from the police or other authorities; clearly, this film pre-dates the arrival of the Department of Homeland Security. The forced-perspective shots used to creating the mini-minions are as well-executed as anything you’ll see today, and it’s executed with enough verve and enthusiasm as almost to make you forget the tedium of the early portion.