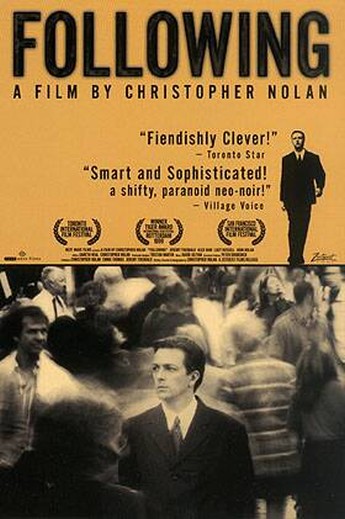 Nolan’s debut movie shares a number of features with Memento: the structure is similarly fractured and the hero only realises his entanglement at the end. There’s even an ambivalent woman with some nasty associates, and a guy who pretends to be his friend, yet… It’s not quite as successful as his later “remake”, since the justification for the format is little more than to screw with the viewer’s head – the final twist is at the end, both chronologically and cinematically, making the rest of it seem as contrived as the black-and-white photography.

Still, it’s a highly intriguing tale, about a wannabe writer (Theobald) whose hobby is following people. When he is caught by Cobb, whose hobby is burgling people, a train of treachery is set in motion, hurtling down the siding marked disaster, towards the buffers of oblivion. [Okay, enough of the railway metaphors.] The three actors all perform solidly, though Russell is perhaps too close to impersonating Miranda Richardson for comfort. Haw, as Cobb, has a magnetic nastiness that is impressive – I wasn’t surprised to discover that he is, in real life, a lawyer! While there is a jigsaw-like delight to be had in assembling the pieces, the main delight – again, much like Memento – is an immaculate script that packs more punch into its sparse 70 minutes, than many movies twice the length.