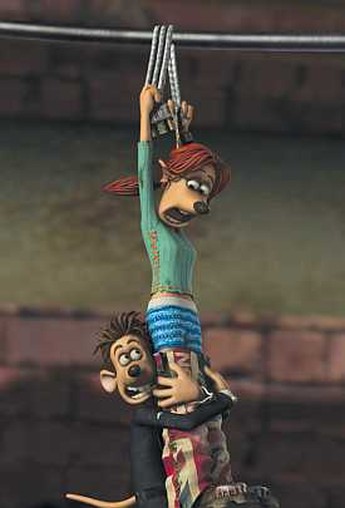 British readers of a certain age will remember Dangermouse, an animated series in which two rodents fought to stop the malevolent plans of an evil amphibian. There’s more than an echo of that here, in this Aardman feature which sees Roddy (Jackman) sent down the toilet-bowl, to find himself in a subterranean world where he teams up with Rita (Winslet); she’ll get him back home, he’ll replace her fake ruby with a real one. However, they run foul of Toad (McKellen), who plans to use the imminent World Cup Final between England and Germany, and the resultant half-time toilet rush, to flood the rats’ city and turn it into somewhere his millions of tadpoles can inhabit instead. When his henchmen fail to stop our furry hero and heroine, he turns to his French cousin (Jean Reno) to do the job. Can Rita and Rodney prevent him, and also get Rodney back to the surface? And will England lose on penalties, yet again?

I’ve never been a big Aardman fan, finding a little of their oh-so Britishness goes a long way. This, however, was a very pleasant surprise, with a number of thoroughly amusing sequences and lines, such as Rodney’s droll response on discovering he’d been cooking with maggots rather than rice, “That explains why it all ran to one side when I put salt in it.” The characters are engaging, not least the slugs who roam the background, singing like a slimy Greek chorus, and the humour flows naturally from them and the situations. Visually, it’s perhaps a little too busy at times, and one wonders why they go to such great lengths to make CGI look like Aardman’s trademark claymation, though the large amounts of flowing water likely explain the latter choice. Some slackage of pace in the middle is largely forgivable, and the overall effect is charming. This works for a bigger audience than the children you might think it was aimed at, though it’s sheer Britishness likely explains its death at the American box-office.