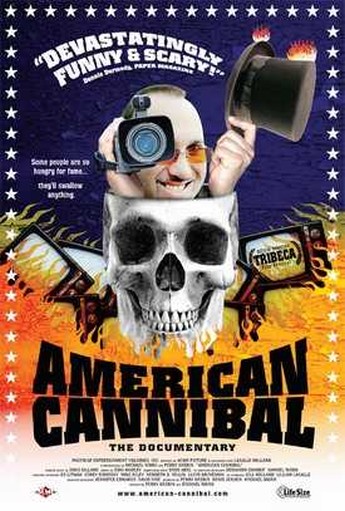 With the writer’s strike sidelining many scripted shows this winter [we are sadly missing 24], the gaps have largely been filled with ever more reality television. And, inevitably, in their wake have come the entries which cast a jaundiced eye over the whole proceedings. Some have done so very successfully – Series 7, for example. Cannibal is not one of those. Despite coming up with some decent stabs at the genre, fails because it takes its premise, castaways on an island who have to turn to cannibalism to survive, and doesn’t run with it adequately. The second half of the film is largely devoted to the filming of the show’s pilot episode, but it fails to explain how this is supposed to work. Are there cannibals already on the island? Are the players starved until they have no other option? It’s all maddeningly unclear; even the title of the show might be American Cannibal, Ultimate Ultimate Challenge or Starvation Island.

The film is more effective early on, as the main characters. writers Ripley and Roberts, pitch their reality-show ideas to various producers – including to the Independent Film Channel, which would seem to be a lost cause from the start. They finally find a willing ear in porn-tape promoter Blatt, who distributed the Paris Hilton sex-tape [the good quality second one, he stresses], This section works better, intercut by interviews with those who make and write about the shows, which tend to prove that the genre is almost as fake as any scripted show. It’s a shame they didn’t use the second half to shatter that illusion, as it seems to set up, and the result is a damp squib of epic proportions. As they said in Amityville 3-D, “Reality is the only word in the language that should always be used in quotes” – especially where television is concerned.