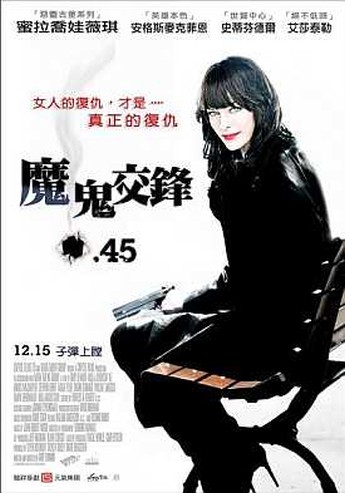 From the DVD cover, you’d be forgiven for thinking this was a remake of Ms. 45. You would also be severely wrong: this is much more of a bleak, nihilistic drama, more in the vein of Neil LaBute, in which a range of variably loathsome characters are unpleasant to each other. Yet, the results are nowhere near as bad as that might sound. While occasionally difficult to watch, with its graphic depiction of an abusive relationship, it is compelling, and is well-enough written and acted to overcome these issues. Big Al (Macfadyen) is a gun-dealer in one of New York’s grimier boroughs; his girlfriend, Kat (Jovovich) alternates between being desperate to leave the torture (mental and physical) he deals out, and stoically standing by her man. Yet there are just as many others who want the chance to love her, both men (Dorff) and women (Strange and Aisha Tyler).

The tipping point comes when Kat sells a gun behind Al’s back, setting in motion a train of events that will lead to deceit, betrayal and murder. It’s all amoral and cynical to the point of bitter: the characters who behave with the milk of human kindness get screwed over as much as anyone else. Jovovich is surprisingly credible, having only paid attention previous to her, in movies where she’s kicking ass. There is a certain credibility gap to be overcome, as her supermodel looks initially seem ill at ease with the setting, and there was a point where I wanted Resident Evil’s Alice to tag in for Kat, and payback Al in spades. However, given the aforementioned sleeve does not exactly hide the revenge motif, I don’t feel spoilerish in saying he gets his in the end. There is a certain dark humour to be found in the commentary by supporting characters, and Mcfadyen is excellent, in a “is it him?” way. When a DVD sleeve is so misleading, it’s usually a bad thing; in this case, it conceals a film whose quality just goes in a different direction.