If you’re ever accused of ripping off another film, book or cultural product, it’s always good if you have some kind of plausible deniability. For instance, Suzanne Collins claims never to have heard of Battle Royale until she turned in The Hunger Games to her publisher. While I can’t say if this is true, at least it’s possible. But I can be fairly certain that writer/director Hinzman can’t make the same claim, about the movie shamelessly pillaged here. How do I know that? Because he was in it. 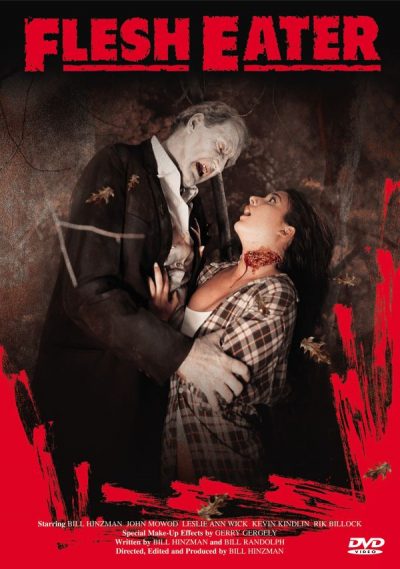 For Hinzman is one of those names horror fans might vaguely recognize, but probably end up Googling. There, they will discover he played the cemetery zombie in Night of the Living Dead. He’s basically Patient Zero of the modern zombie film. As is well documented, the original distributors of Night, the Walter Reade Organization, neglected to label it for copyright purposes, and the movie entered the public domain. Which is why, two decades later, one of its minor characters was able, more or less, to remake the film without getting his ass sued. On the plus side, you will probably leave with a new appreciation for Romero’s work, which arranges the same elements to much greater effect.

It does at least start on a somewhat different road, a hayride taking a group of teenagers, devoid of acting ability, out for a rural party in Beaver County, Pennsylvania [one over from Butler County, where Night was filmed]. However, it’s not long before Hinzman – once again, playing the initial zombie – shows up, attacking various members of the group, typically as they head off for makeout sessions in the barn, etc. And the longer this goes on, the more this heads back to Romero territory. The survivors take refuge from the walking dead in a deserted farmhouse (!), although a couple lock themselves in the basement (!!), only to be mistaken for zombies by the sheriff’s posse and shot when they emerge (!!!). C’mon, really?

The only genuinely new aspect here, is that the apocalypse descends on Halloween. This allows for some moderately amusing moments involving difficulty in distinguishing between flesh-eating ghouls and people dressed as flesh-eating ghouls, though even that feels more like a wasted opportunity. There’s a Halloween party in a barn – based on this movie, barns appear to be the sole entertainment venue in Beaver County – though this is so clunky, it is a credible contender for worst party ever, and that’s before it turns into a bloody massacre.

The special effects are actually not too bad, with some decent mannequin work (shown, top) and copious use of blood and entrails. It’s not anywhere near enough to save this, when the scenes are about equally divided between those lifted from Night of the Living Dead, and ones that don’t make sense at all, unless you’re very good at filling in apparent blanks in the story-line. Or alternatively, maybe our attention simply slipped away, given we started watching this at midnight. I can certainly assure you: this is not the kind of film for which it’s worth staying up.