The loss of Parks, best known for his role in both parts of Kill Bill, spurred me to take a look at this one – not least because of the “local interest” aspect, it having been filmed on location here in Phoenix. Throw in Security Chief Tasha Yar from Star Trek: The Next Generation, and how can this possibly go wrong? Well… 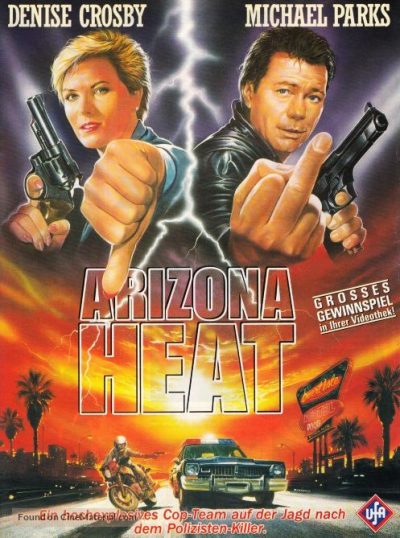 The storyline is boilerplate eighties cop movie. We start with a raid on a drug lab in a warehouse, where it’s established what a two-fisted, tough son of a bitch Det. Larry Kapinski (Parks) is. But shortly afterward, someone starts killing off his fellow officers. One is blown up by what is initially thought to be a bolt of lightning (! – I guess forensic science was rather primitive, in the distant past which is 1988), another killed in a hit-and-run, and a third shot during a bank robbery. It’s the discovery that the bullet dug out of his corpse doesn’t match the guns used by the perps, which really kicks things off, and it becomes a race against time to stop more cops from being murdered.

That’s just one half of the plot, however. The other concerns the new partner Kapinski is assigned by his boss, Captain Samuels (Farrington), over and above his loud protests that he works alone. Worse is to follow: it’s a woman, Jill Andrews (Crosby), in the hope that this will rein in Kapinski’s more… aggressive investigative techniques. But the worst thing of all, for such a prime specimen of 80’s B-movie manhood? Andrews is a lesbian. The horror. The horror…

It’s certainly a product of the era, in a whole variety of ways, but somehow manages to be both incredibly Neanderthal and ahead of its time in its attitudes. The hero seducing Andrews’s air-hostess girlfriend and videotaping the encounter, is douchebaggery of the highest order. There’s a general feeling her homosexuality could be cured by a good seeing-to from Kapinski, culminating in what feels, from a 2017 perspective, creepily like a sexual assault in a shower. On the other hand, he does defend her from the even more blatant homophobia committed by his colleagues. And if the film is on very thin ice sexually, it’s remarkably non-ableist for the time; Samuels is confined to a wheelchair, but nobody even bothers to mention this.

Still, the two halves of the story do not mesh well at all, and they should likely have stuck to one or the other. And rather than the social commentary, preferably the action side of things, which is generally decently handled. The highlight is likely a car-chase in pursuit of the bank robbers, through the streets of Phoenix and out into the desert, containing some surprisingly well-done aerial work. Though we learn later, that when menaced by an attacker wearing a motorbike helmet, trying to stab them in the top of the head with a pair of scissors, is likely not the greatest defensive tactic.

From a Phoenix resident’s perspective, it’s eye-popping, with most of the city shown here being virtually unrecognizable. It’s a cinematic time-capsule of an area so lost to the march of progress, what we saw in Hitchcock’s Psycho, almost three decades previously, was much more obviously Phoenix than this. I think a lot of it was probably in the old commercial area, around Van Buren and Roosevelt. Flashes do occasionally look vaguely familiar, though the area has been severely redeveloped since, courtesy of projects like Chase Field (opened in 1998) and the Arizona Center (1990). The warehouse raided in the opening scene, appears to be perched on the edge of the desert, and I’ve no clue at all where that might have been. 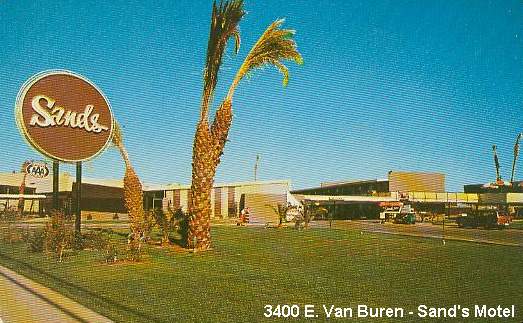 Of the explicitly identifiable landmarks and locations, almost none are active today. The exception is Warsaw Wally’s bar, on Indian School and 26th, which is still open, albeit now known as Chopper John’s. Mr Lucky’s, a strip-club for the purposes of the film, was actually a nightclub and country music venue on Grand Avenue. Future American Idol winner, Jordin Sparks, won a talent contest there in 2003, but it closed subsequently, and is currently a furniture store. The Sands was a hotel complex on Van Buren, and seemed to have been quite the place in its day. A couple of blocks down was the Serendipity Cocktail Lounge, at 3218 E. Van Buren, and that’s all I’ve been able to find out about it. Other places used here, like Sylvester’s Sizzling Catfish Restaurant, have gone to such an extent, that even the Internet has completely forgotten them.

If the “mismatched buddy cop” thing we get here is the plot equivalent of flogging a dead horse, both Parks and Crosby do pretty well with what they’ve been given. There’s a somewhat self-effacing quality about Kapinski which is occasionally endearing: he may be a dick, but what you see is what you get, and he’s also persistent, loyal to his friends, and brave to the point of stupidity. But, mostly, he’s a dick: witness him taunting Andrews about having a weak stomach before they go into the morgue, only for him to be the one who rushes out to throw up. The supporting cast is generally solid, led by Briskman, who brings surprising life to his role as Toad the informant.

The decent performances and local interest proved just about sufficient to counter the dubious qualities of the plot, which appears to have spent too long out in the titular local weather. Still, you’ll likely be glad that both Phoenix and action movie cinema, have clearly moved on considerably over the last thirty years.