This film’s biggest impact on horror history is likely not itself. Three years after its release, a director was working on his first feature, called Night of the Flesh Eaters. The distributor expressed concern due to the potential for confusion with this film, so the director changed his – losing copyright protection in the process – to be called… Night of the Living Dead. You may have heard of it Probably a good deal more so than its neo-namesake, and that’s with justification. This has its moments, to be sure. Unfortunately, it also has long periods of inaction, and some of the most annoying characters I’ve seen, even by the low standards of sixties B-movies.

Charter pilot Grant Murdoch (Sanders) is hired to fly an alcoholic actress, Laura Winters (Morley), and her personal assistant, Jan Letterman (Wilkin) from New York to Massachusetts, but a storm on the way forces his sea-place down by a remote island. There, they meet research scientist Prof. Peter Bartell (Kosleck, who is surely related to Udo Kier), and wait for the weather to improve. The sea-plane goes down under mysterious circumstances, and a body turns up on the beach, stripped clean of its flesh. Turns out that the water is infected with some kind of voracious organism, which will devour anything unlucky enough to come into contact with it. It gradually becomes clear the professor’s presence on the island is no coincidence. C’mon: he has a German accent after all, and this was less than twenty years after the end of the war. 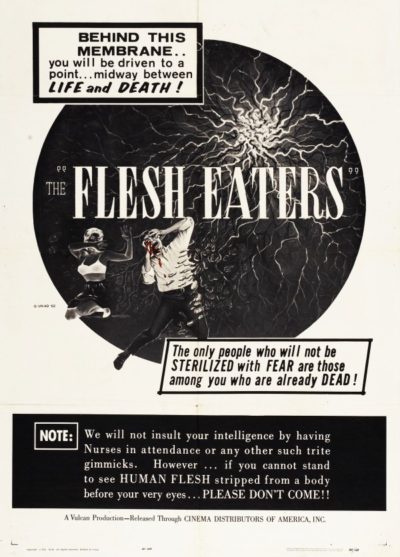 Things are not too bad once they eventually gets going, when the microscopic monsters combine forces and turn into a giant blob with tentacles (top), which can only be killed by Grant strapping on a wet-suit and going after it carrying a giant syringe, filled with human blood. Don’t ask. [It is “explained”. Those quotes are there for a reason] The issue is the hour or so it takes to get to anything particularly exciting. We’re so far ahead of the characters in figuring out Bartell’s alignment, it’s like being on episode eight of a show, and trying to converse with a friend who has just finished part two. It’s also painfully clear who is going to die, and who isn’t. Spoiler: the beatnik who inexplicably shows up on a raft, should not bother making plans.

Winters is likely the worst of the bunch, perpetually shrieking about needing a drink, or something along those lines. Being eaten alive is a credibly preferable choice to remaining in her company. Some of the effects are nicely gnarly, considering the era; the eventual fate of Bartell is surprisingly graphic, even if the impact is greatly reduced by being in black-and-white. The film is credited as having been edited by notable smut peddler Radley Metzger, though it appears he didn’t do that much work in it. There’s even a local connection, the film having premiered here in Phoenix on March 18th, 1964. After all, where better to release a film about water-based monsters, than in the heart of a landlocked state?