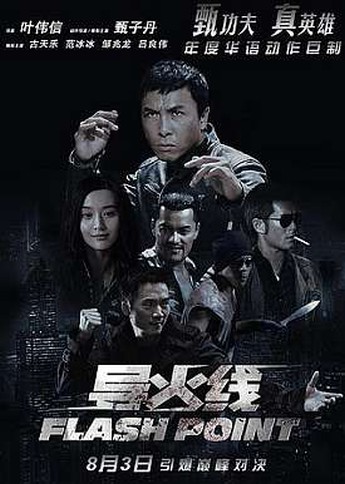 The rating at the end is almost entirely due to the final 30 minutes, which is where the pedestrian directing talents of Yip are supplanted by the definitely-not pedestrian action choreography talents of Yen. Up until that point, this has been a pretty tedious police-thriller. Detective-sergeant Ma Jun (Yen) is the outside man for his undercover colleague, Wilson (Koo), who has gone deep inside the gang of Archer (Lui), and is providing evidence. Eventually, it’s enough to secure Archer’s arrest, though not until after Wilson’s cover is blown, and he’s forced to hurl himself from a speeding car. This is only the start of the problems, since Archer’s colleagues set about sabotaging the case, by the simple method of attempting to kill every conceivable witness. This includes Wilson, who gets out of hospital and is given by a party by his colleagues which includes an explosive turkey, courtesy of the bad guys. Well, at least the shindig goes off with a bang. It doesn’t quite do the job, but when the bad guys continue their efforts in the hospital, kidnapping Wilson’s girlfriend, it’s time for Donnie Yen to make that face.

If you’ve seen any Donnie Yen movies – and as he’s among the best martial-artists of our generation, I trust you have – you’ll know what I mean. Here, “that face” comes after a villain tries to use a little girl as a shield, and then literally throws her away. It’s an expression that means the bad guys are going to have serious damage inflicted on them, real soon, and the film delivers this in spades. Yen seems to have incorporated both MMA and parkour tricks into his arsenal, and uses them to abundance, most notably in a bone-crunching finale against Chou, which destroys about as much construction as your average Godzilla flick [hmm… Godzilla vs. Donnie Yen. I’m filing that one away in my “potential movie pitches” folder] Really, what you have hear is martial-arts porn: you care about as much for the dramatic elements here, as you do for the bit where the delivery guy is pretending to arrive with pizza at the sorority house. Judge Flash Point by this alone – the bulk of the movie – and it’ll be found badly wanting, though the soundtrack is surprisingly effective. However, the payoff is magnificent, and redeems the movie from tedious time-waster, to certainly worth fast-forwarding through.