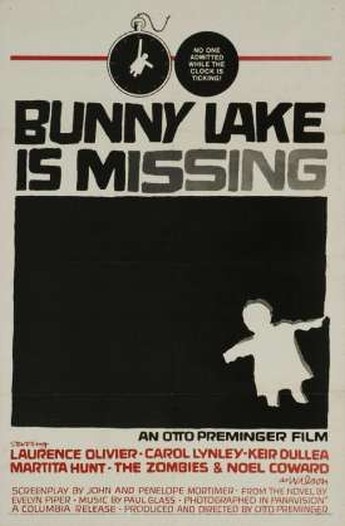 Ann Lake (Lynley) drops her daughter, Bunny, off at a kindergarten, after having arrived in London to join her brother, Steven (Dullea). When she comes to pick Bunny up later, not only is the child missing, but no-one saw Bunny – she was left in a room, and the cook said she’d keep an eye on her, but was more concerned with her junket (I had to explain to Chris what this was. In case anyone else doesn’t know, it’s a milk pudding, perhaps a bit like blancmange). While the police are called, they can find no evidence of her existence; back at the apartment, Ann finds all Bunny’s possessions are now missing. Superintendent Newhouse (Olivier) begins to suspect that there may not actually have been a daughter at all, as he finds out from Steven things such as Ann having had an imaginary childhood friend called Bunny. So, is Ann insane? Was there ever a daughter? And what is the connection of their supremely-creepy landlord Wilson (Coward), who wants the police to whip him and has the Marquis de Sade’s alleged skull in his flat?

Based on a novel by Evelyn Piper, Preminger supposedly changed the ending because he found the original work lacked credibility there. Not having read that, all I can say is, it must really have sucked, since it’s easily the movie version’s weakest link – it’s a great deal better putting the chess pieces into position than it is trying then to move them around into a satisfactory conclusion. It’s difficult to say more without engaging in serious spoilers: you’ll know the moment the story derails itself, and from then on, there’s just too many coincidental arrivals, and Ann’s sudden leap from absolute ignorance to complete understanding stretches belief a great deal too. This is a terrible shame since there’s a lot to admire earlier on, especially the sterling performances from the Brits, Olivier, Coward and Martita Hunt as one of the kindergarten’s founders. Preminger does a fine job of capturing the ‘stranger in a strange land’ experience Ann goes through, even if the performances by The Zombies are about as out of place as any ever seen in a film. The unfortunate shift into poor scripting in the middle may explain why Joe Carnahan has been working on a remake – I’d suggest that he may want to consider returning to the original novel.