I can only imagine the conversation which took place in the distribution company’s office, with regard to this movie and its original title:

“I think we can use the film, but Polycarp? What’s that again?
“He was a second-century bishop. In Greece.”
[Long Pause]
“Yeah. Well, actually, no. Here’s what we’re gonna do.”
[Reaches for black marker]
“Oh, and I hope you weren’t attached to the DVD sleeve either…” 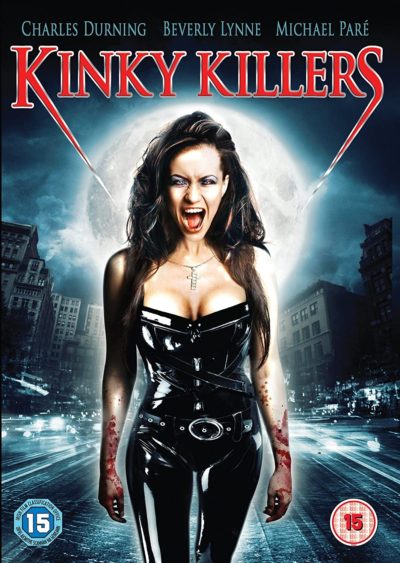 Hey, presto: say what you like about the quality of the actual movie – and we will have plenty to say there before long, trust us on that – whoever was involved with the marketing was a frickin’ genius. We stumbled across this on cable, so the cover (right) wasn’t even a factor. Frankly, if we had, it might have been a warning, because it would have been one of those cases where the sleeve is clearly trying way too hard. As is, the title was sufficient, along with the presence of veteran character actor Charles Durning. He won three Purple Hearts in World War II, taking part in both the Normandy landings and the Battle of the Bulge, and shows up here in one location, to no real purpose. One can only surmise some kind of gambling debt was involved.

This is not impossible: there have been gangster/movie connections elsewhere, and this feels like the same sort of thing, an ill-conceived vanity project, though this has far less sense of any connection to reality. Bodies – mostly of blonde strippers – are turning up in the streets of New Jersey, with parts missing and tattoos on them the victims didn’t have when they were alive, including the mysterious word, “Polycarp”. The police are baffled. What does it mean? I guess the NJPD do not have access to, oh, Google? Detectives Paré and Belasco are “investigating”; quotes used advisedly, since their methodology is not quite straight from the police manual.

Still, it gets them into the right area: that inhabited by Dr. Jill Kessey (Lynne), a psychiatrist who has been giving therapy to a number of the victims. Yeah, because strippers can regularly afford $200/hour therapists, right? Kessey has an ‘open’ relationship with her boyfriend (and his bad case of back acne), and it turns out he slept with the victims. The cops suspect him. Which means they break into their room, interrogate him in the shower, take him away in his underwear then dump him under a bridge in what looks like Brooklyn, according to Chris. That drooling sound you hear is civil rights lawyers thinking about the possibilities. The trail leads from there to another psychiatrist, Dr. Grace Sario (Lewis), who also has an unconventional approach to therapy, if you know what I mean, and I think you do.

Ok, so far, it’s been dull in an erotic thriller kind of way, much as you’d expect from Ms. Lynne, the veteran of movies with titles such as The Bikini Escort Company, and the Black Tie Nights series. To describe her as “unconvincing” as a psychiatrist would be putting it mildly, and I needed to convince Chris at the half-way mark to persevere, and had to compromise by re-locating with her from the living-room to the bedroom. I’m glad I did, for it’s only after that point that full-blown religious looniness breaks out. Oh, it had been hinted at, with Pare’s cop found of quoting religious scripture to suspects [probably adding another count to that lawsuit], and if we’d been bothered enough to Google “polycarp,” could have found out its origins before the movie divulged them to us. However, it’s not until the final reel that we discover the truth.

[Spoiler alert, I guess. Though as usual, if you go ahead and watch this one, you should be doing so purely for amusement, rather than the plot.]  The murders are actually being committed by a coven of witches, led by Doctor Sario and Kessey, as part of a ritual with the eventual aim of putting the (very clearly plastic) pieces together, and triggering the coming of Lucifer. As you do. This is all explained in great detail by the perpetrators after they have captured three of the male actors: this is probably necessary, though it has the feeling more of a theology lecture than anything else – if the subjects are tied up, it’s likely to avoid them being bored into unconsciousness by the exposition and toppling off their chairs. Throw in some entirely gratuitous sex scenes before we get to that point, and the movie makes a late surge into incredibly-bad territory.

The entire exercise seems to have been churned out with amazingly little thought, from the basic concept – those with a fondness for T+A will be put off by the religion and vice-versa – all the way through to the casting, where I wouldn’t be surprised if they sold off all the roles at auction, not just this one. In Durning’s long career, which has gained him nine Emmy noms plus a pair of Oscar nods, it’s unquestionably a low-water mark. Even on the considerably less-distinguished resumes of Paré and Lynne, this is something which will be buried and forgotten as nothing but lurid nonsense with few redeeming merits.