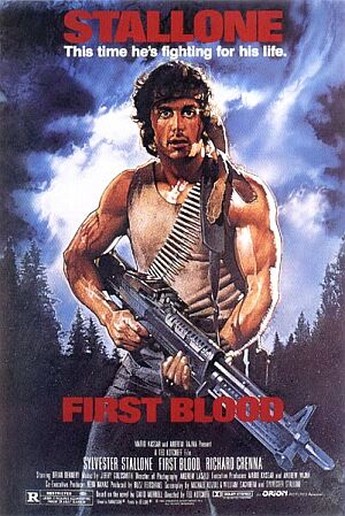 Stallone’s first non-Rocky hit was somewhat overshadowed by Rambo: First Blood Part II (not many sequels take three times as much at the box-office), yet is still a pretty good action romp in its own right. Rambo is a much better part for Stallone than Rocky, and he turns the Viet vet into a force of nature, with whom you generally sympathise. Yet Dennehy’s sheriff is by no means a cardboard cutout; after a tragic accident leads to the death of a deputy, it become a case of an irresistible force meeting an immovable object, despite the best efforts of Rambo’s former CO (Crenna) to prevent mini-Armageddon breaking out.

The sequence where Rambo first takes on the sheriff and his posse is fabulous, falling somewhere between Predator and Blair Witch, as an unseen force picks off the hunters, one by one. This, and the blistering exchanges between Crennan and Dennehy are wonderful. Less impressive is the ending, apparently radically changed from the book; the film just kinda peters out, after Stallone delivers a monologue which is almost totally intelligible. Otherwise though, it succeeds by concentrating on his physical presence – he cracked ribs doing some of his own stunts. Yet it is also more thoughtful than you’d expect, pitting the no-longer needed war veteran against those who stayed at home. A nicely-balanced piece of work.