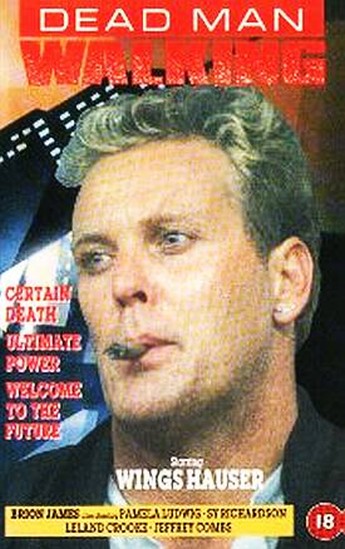 Maybe it’s just coincidence, but I seem to be running into a lot of plague movies of late. This is one I haven’t seen for maybe 20 years, set in the then-future – specificaly 1997. It’s a post-plague world where there is a wide chasm between the haves and the have-nots, as well as those who are terminally ill but not infectious, known as Zero Men. It has an excellent B-movie cast, led by James as Zero Man psychopath Decker, Hauser as Zero Man bounty hunter John Luger, and Combs as a chauffeur for the CEO of the Unitas Corporation. He hires Ruger to enter a quarantine zone, in pursuit of Decker, who has kidnapped the love of his life, Leila (Ludwig), the daughter of a rich industrialist. It plays like a combination of Blade Runner – not least in the presence of James. playing someone with a limited lifespan, who really doesn’t give a fuck any more – and Robocop. The latter is particularly due to Mario Machado, who plays a newscaster as he did there, interrupting the narrative with sardonic news commentary on life in this dystopian future.

The main issue is, the film doesn’t really know what to do with all these individual pieces and characters, which are a lot of fun on their own (Chainsaw Roulette, where you put the blade against your own throat, and let your opponent yank on the starting handle). There is a lot of driving through post-apocalyptic landscapes. No, really: a lot of driving. Occasionally, Ruger and Chaz get close to Decker and Leila, only for them to slip away. Rinse, repeat, interspersed by encounters with the strange and unusual residents of the plague zone. It ends at a venue called Cafe Death, which apparently makes the place where they play Chainsaw Roulette look like Disneyland. Which apparently means a bizarre piece of performance art, that ends with someone being set on fire. What do you expect, when you have a sci-fi film helmed by the director of New Wave Hookers?

What we wrote then [6] Not read much about this one, surprising given the cast, and a pity as it’s one of the better post-apocalypse (plague, to be specific) films. Combs’ girlfriend is kidnapped by an escaped criminal and taken into a plague zone; he hires Hauser, who’s terminally ill (and enjoys playing Russian Roulette using a chainsaw!), to rescue her. A well-thought out world structure, excellent ideas and some memorable moments plus a healthy dose of violence combine to produce a film which could easily pass for Mad Max 4. Try not to confuse it with either the TVM or the Sharon Stone pic, both with the same name, but about capital punishment! 8/10