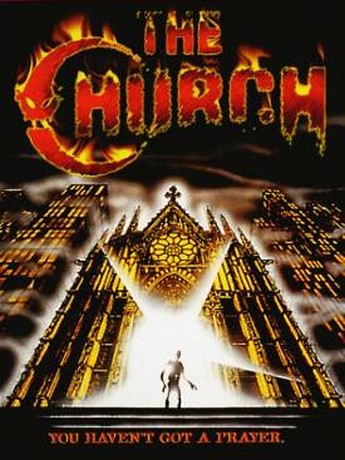 [2] My opinions on Italian horror films are pretty well known to readers of this ‘zine, so I didn’t approach this with much enthusiasm, especially when I heard it was going to be shown in Italian – without sub-titles. I have to admit that this was a pleasant shock – it’s nice to see that they can make a decent movie now and again that doesn’t value intestine-chomping zombies/demons/cannibals or hysterical women being stalked by misogynistic killers, above things like plot or characters.

It begins in the Middle Ages, when a band of Teutonic Knights go on a witch-hunt and massacre the inhabitants of a village, burying their bodies in a pit under a stone cross. 850 years later, a cathedral has been built on the site to commemorate the incident. Tomas Arana plays an archaeologist who is studying the cathedral and discovers the cross, only to unleash a malignant force that has been waiting for centuries…

It’s difficult to truly criticize this film because I can’t say whether or not the apparent shortcomings in the story (what is the force?) would have been clarified if I had understood the dialogue. Let’s be charitable and assume it is, since the visuals are very impressive and it does at least make an attempt to justify the more blatant holes; there’s none of the “all the doors are suddenly locked for no good reason” approach, so beloved of Dario Argento.

Two memorable deaths involving a tube train and a pneumatic drill and very little to detract from the overall doom-laden feel leave this one film that I’ll certainly make an effort to see in English. Though the burning question has got to remain, “Why does every Italian film look as if it’s been dubbed?” [answer: because most of them are post-synched!]

Update [14] – Finally out after four years, and benefitting as, these days, even mildly decent horror films are rare. Originally to be Demons 3, it’s set in a church built on a mass grave; after an hour of atmosphere, doors lock and people start dying in interesting ways. Soavi mostly controls the usual Italian flaw of “never mind the plot, have some visuals”, and Tomas Arana is nicely possessed. On the sleeve, Argento gets seven mentions, Soavi one; hehehe, they can’t have seen Trauma!