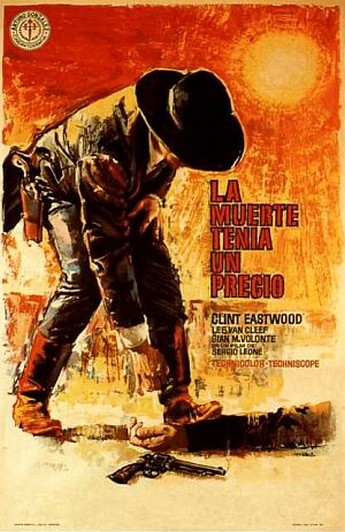 In terms of plot, this is fairly sparse: two “bounty killers” (Eastwood and Van Cleef) team up to go after bad guy Indio (Volonte). Yet Leone and the actors deliver this with such panache and style that it becomes hugely satisfying. A simple scene where Indio kills a family becomes a saga in itself, the music of his pocket watch swelling to a pipe-organ crescendo. Volonte is excellent – it says much that he out-loonies henchman Kinski – but Van Cleef and Eastwood are equally as good.

While perpetually trying to swindle each other, they also have a dry respect, a duality which adds impetus to their hunt of Indio; there’s even a degree of humour, though we laughed most hearing the trailer declare Leone is “better known as Bob Robertson”. Eastwood’s Man With No Name (also called Manco, trivia buffs) joins Indio’s gang and everyone inevitably ends up in hot water – literally, since Agua Caliente is the name of the town. Here, if things do get a little sluggish, we’re talking about five minutes that are sub-stellar. You know exactly where it’s going – two men at opposite ends of a Techniscope frame – yet the route by which it gets there is endlessly fascinating and immensely watchable on all levels: story-line, characters and technical merit.