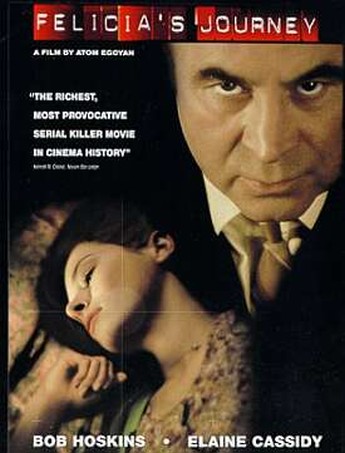 A subtle yet disturbing film, held together by Hoskins’ performance as Mr. Hilditch, the catering manager whose life holds dark secrets at its core. From the get-go, the alarm bells are ringing in the viewer’s head, with his super-precision and obsessive behaviour. We don’t know precise details, but when his path crosses that of innocent Irish girl Felicia (Cassidy), the sense of unease grows. She is over in Birmingham to seek her ‘boyfriend’ – his opinion on that may vary, especially if knew she was pregnant – and finds in Hilditch someone she can trust. So she thinks – the more we see, the stronger the urge to shout “Run!” at her.

It is extremely understated, and we never see Hilditch harm anyone, yet there’s never any doubt that an upbringing by his TV cook mother (Khanjian, the director’s wife) has left him monstrously scarred. He seems stuck in the 1950’s, and so in her own way does Felicia (and her father, outraged at the concept of his daughter going out with a British soldier) – the father-daughter relationship which results seems almost natural, though Cassidy has little to do except stare earnestly. Egoyan drenches almost every scene in green, and if the climax seems anti-climatic, it’s hard to envisage Hilditch chasing Felicia with a chainsaw. But as a portrait of the banality of evil, this scores a bullseye.