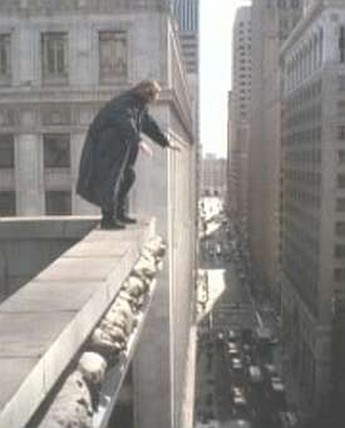 After a plane crash, the whole attitude of survivor Max Klein (Bridges) changes: life’s worries evaporate, and he becomes serenely convinced he’s immortal. His wife (Rossellini) can’t understand what’s happened to him, and his lawyer (a delightfully oily Hulce) wants to maximize the trauma so they can get more money. The only person who can relate to him is fellow survivor Carla (Perez), a relationship with which Mrs. Klein grows increasingly unhappy.

Bridges’ performance is solid, playing someone above and beyond the cares of everyday life; the crash itself (realised in fragments) is portrayed to chilling effect; and there’s one fabulous moment, where Max decides that the best way to end Carla’s guilt-trip over her son’s death in the crash, is to plough their car headfirst into a wall. Yet the whole is less than the sum of these parts, with the female performances irritatingly whiny, and subplots such as the boy Max rescues in the crash, unfulfilled. Peter Weir ventured into mysticism before with Picnic at Hanging Rock, and that worked rather better, with a more consistent tone – or maybe it simply didn’t attempt to stuff deep and meaningful messages about life in there too.