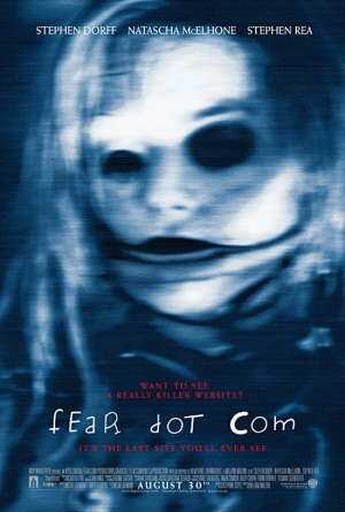 You know you’re in trouble when a film can’t even decide whether its title should have spaces or not. Shamelessly ripping off the central concept from Ring (there, a videotape killed viewers; here, a website kills visitors), this woeful mess stops giving you any worthwhile information about half-way through, sinking into a morass of hallucinogenic sequences as a substitute for coherence or interest. Dorff is a cop who finds a dead Udo Kier on train tracks, bleeding from the eyes, the first in a series of similar deaths. He teams up with Department of Health officer McElhone, dumping his actual cop partner (Combs) for no apparent reason, beyond the movie’s fervent desire for a Mulder/Scully pairing. The duo discover that all the victims visited the clunkily-named www.feardotcom.com website, where a mad doctor (Rea) slaughters women live via webcam.

The idea of the Internet becoming flesh is interesting – if nicked wholesale from anime series Serial Experiment Lain – but never goes anywhere, as Malone is too busy setting up his next badly-lit set-piece. Combs and Kier (the reasons we went!) are wasted horribly. Either would have been better mad doctors than Rea, and getting Combs to play a normal guy is like making Salvador Dali paint bathrooms. About the only point of note is that it was filmed in Luxembourg. I guess Prague must have been booked that weekend.