I hadn’t actually heard of this film before the Oscars last weekend – to be honest, my overall interest in the Academy Awards was more or less at an all-time low this year. Here was the progress of our thought process over the course of Sunday night: 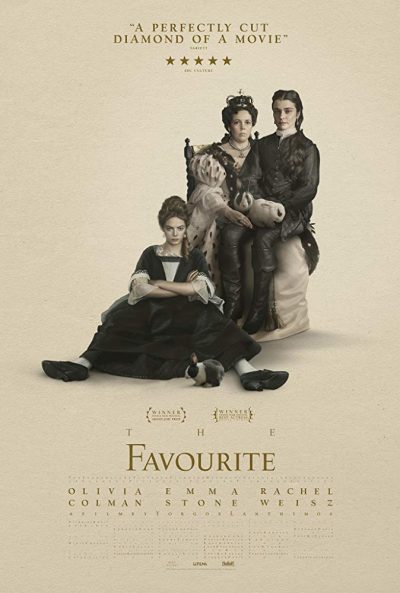 Which is how we came to be watching the film on Monday night. It’s an interesting comparison to Mary Queen of Scots. Both cover similar historical topics, focusing on a female monarch and her relationships, and to be honest, play fast and loose with history. So why did MQoS annoy me so much more? It’s probably because there, the changes were for no particularly good reason, apparently beyond political correctness. Here, they seemed to be for the benefit of the film, to enhance the drama. I’m fine with that. Whenever facts and dramatic needs conflict, the former will always lose, and that’s the way it should be. Just do it for good reason.

The basic facts here seem credible enough. In the early 18th century, England was ruled by Queen Anne (Colman), who is… a bit eccentric, to put it mildly. Indeed, the words “a barking mad loony” are probably more appropriate. Helping her govern is Sarah Churchill, the Duchess of Marlborough (Weisz), who wields considerable influence in guiding the Queen’s decisions. Into the picture comes Abigail Masham (Stone), the Duchess’s cousin, though one whose family have fallen on hard times, and she obtains a job as a servant at court, courtesy of Sarah. Through helping alleviate the Queen’s gout, Abigail begins to gain royal favour – something with which the Duchess is increasingly unhappy.

It feels quite a lot like Dangerous Liaisons, though rather than a straight duel between its antagonists, it’s more of a bizarre love triangle [I say so partly for the New Order reference, partly because the Queen has 17 rabbits as pets, a surrogate child for each one she lost – sadly, that’s something about which the film is 100% accurate. Uh, the kids, I mean. I’m less sure about the whole rabbit thing] This is likely when its at its best: Abigail and Sarah playing social chess and trying to enhance their own position with the Queen, while harming the other’s spot. Well-mannered cruelty is always such fun to watch.

However, it does seem to struggle with an unevenness of tone. There are comedic elements, sometimes bordering on farce; yet they sit uncomfortably with the tragic ones, such as the mental illness affecting Queen Anne. It doesn’t gel as it should, and Lanthimos’s style – all fish-eye lenses and heavy use of atonal Restoration dronecore (for want of a better phrase) is as much a distraction as an enhancement. Still, there’s no arguing that everyone – Colman in particular – deserve the plaudits they have received for their performances. Amazing to see someone go from a bit part on Doctor Who to an Academy Award.