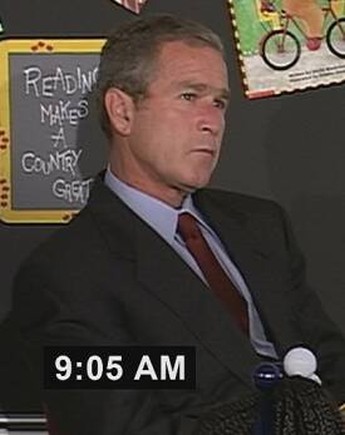 Time to invent a new genre: the “Mooreumentary”, also known as “docaganda”. In this, you make a film not to explore a factual subject, but to promote a previously chosen agenda. Michael Moore is, obviously, the master of this form, but see also Morgan (Supersize Me) Spurlock, who is presumably not planning a film on the effects of overdosing on broccoli for 30 days straight. Does this make F9/11 a bad film? No, as long as you accept that “fair and balanced” are every bit as distant here as on Fox News, and that this will change people’s minds about as much as neo-Nazis admitted the error of their ways thanks to Schindler’s List.

Given those caveats, this is effective stuff, though Moore comes up with little new on 9/11, the Bush-Saudi connection or the reasons for going to war. What is new, and startling, is the footage from inside Iraq, forming a disturbing and compelling argument that, yes, this is Vietnam for our generation. Equally welcome is Moore’s now-traditional confrontational and grandstanding style, using an ice-cream truck to read the Patriot Act aloud outside Congress (since none of them read it before it passed), or asking politicians to enlist their children in the military. It’s all shallow rabble-rousing, but anyone who gets our teenage son to the cinema for a two-hour political diatribe is clearly a master at the art and, as such, can only be admired.