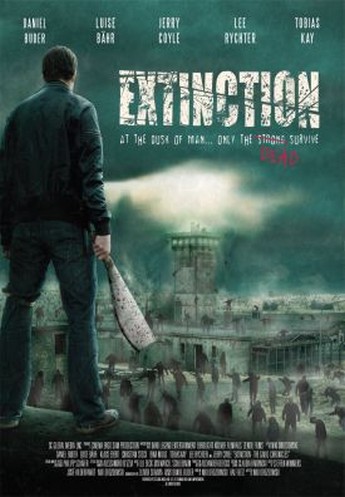 When the end of civilization came, it happened quickly. After a few short days, as 99% of the population succumb to a virus that turns them into cannibalistic zombies, Tom (Buder) finds himself hiding out on an abandoned German military base, and contemplating suicide, fearing he’s the sole survivor of humanity. It’s not quite that bad – he finds other survivors, such as Lisa (Bähr) and her NSA father, Bill (Coyle), – but it certainly is not good, as the zombies are evolving with frightening speed, into forms against which the base’s fences cannot protect Tom and the others. They head in search of a more secure facility near a dam, whose location to which Bill is privy – but getting there is only half the battle. Oh, and in the absence of regular maintenance, the nuclear reactors all across Europe are growing dangerously unstable, so the entire continent may no longer offer any long-term sanctuary.

More than a slight nod to The Walking Dead here: the characters occasionally refer to the zombies as “walkers”, and Tom’s skill with a bow is reminiscent of Darryl from the show. However, there’s much less craft in the zombies here, with make-up which seems stamped from the same mould (or, perhaps more likely, bought from the same Halloween store), and the idea of rapid mutations is largely wasted, with less than a handful of forms seen (and that includes the parkour zombies, apparently in blackface). For instance, early on, Tom speaks of hearing sounds and seeing half-eaten bodies with their skulls crushed: I’m not quite sure what that was supposed to be, but if it actually showed up later on, I was unimpressed. On the other side, the performances weren’t bad, despite the whole “acting in a foreign language” thing [it’s all made in English], and the scenes of empty streets are spookily evocative of a deserted world. It’s likely 20 minutes or so too long, and its open ending is too obviously hinting at a sequel rather than providing any resolution. However, we’ve seen much worse entries in the genre. Trust me on that.