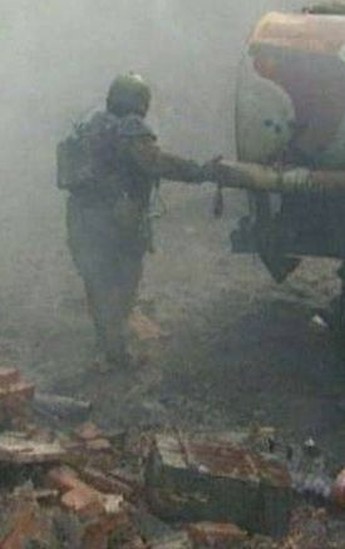 The title of this Russian film translates as “Purgatory,” though that description seems rather generous for what unfolds. It takes place during the battle for Grozny, the capital city of the Chechen Republic, and depicts the struggle for control of a hospital, between the Russian platoon currently in occupation, and a multi-national force of rebels, attempting to take the building. Or, more accurately, what’s left of the building, since it’s little more than a pile of rubble, sitting in the middle of a larger pile of slightly less-organized rubble. The leaders of the two groups are played by Stepanov and Nagiev, who trade barbs with each other by radio, though you sense the old cliché, that if things had been different, they could have been friends. Here, instead, they hurl their forces at each other, with the doomed enthusiasm of the fatalistic and pragmatic. Who wins? It doesn’t really matter. Because, as an epilogue casually points out, a counter-attack ensued, and the hospital switched hands again, rendering all the bloody sacrifice, entirely pointless.

However, that pointlessness may actually be a good part of the point. There’s no doubt this is pro-Russian: they are portrayed fairly sympathetically, while outside of the leader, the rebels are psychopaths who fire severed heads into the hospital and crucify prisoners, while covering all your favourite stereotypes from Islamic fundamentalists to “black widow” snipers. But if there’s a villain here, it’s probably more likely the conflict itself, which takes no sides, and acts like a giant meat-grinder, chewing up and spitting out everyone and everything in its wake. As such, it gets more than a little monotonous, and the presentation is weird, with a voice-over in Russian whenever someone is speaking another language. To be honest, the acting and script are nothing special either – “basic” would be a good word to describe them – and it plays for much of its length like a call of Duty session more than a movie. However, it does possess a raw ferocity, and is likely a fairly accurate depiction of the hell which is a pitched battle in an urban setting. As a cynical and pessimistic view of that, it’s worth a look.