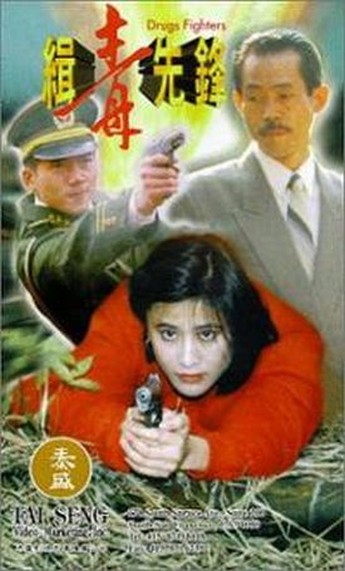 This is a disappointingly pedestrian entry, which doesn’t showcase Oshima as much as it should, and shuffles jerkily from implausible action set-piece to implausible action set-piece, with little directorial talent. A drugs boss (Yuen) has plans to expand the scope of his territory by taking over a legitimate but struggling company, and using it as a front to ship his product around, inside marble busts. It’s up to a transit cop (Ngai) and his girlfriend (Oshima), who is also in the police force, to stop him. There may have been more to the plot than is covered in those bare two sentences, but I genuinely think that covers all the bases. So, let’s move on. If this first paragraph leaves you feeling shortchanged for some reason, go take a walk until you get over it. We’ll wait for you here.

I read a review which said that this “delivers first class action, kickboxing and stunts from start to finish.” I had to double-check there wasn’t another movie called “Drugs Fighters,” starring Yukari Oshima, with which I was confused, because that description didn’t sound like the movie I watched. No, my one had a moderate amount of action, interspersed with sub-mediocre and largely forgettable drama, plus a thin story-line, containing few elements you haven’t seen before. As a result, I found my attention, not so much drifting away, as galloping toward the nearest exit, any time the fists stopped flying. I will admit that some of the fight sequences are quite well-staged; one, in and around a burning car, could be classed as memorable, particularly if it was actually Oshima flinging herself into the inferno (hard to be sure on that). There’s one unexpected death, which leads to the final showdown, and Oshima is her usual, reliable self. But like most genre knock-offs of the time – I think, based on the setting, this one was probably communist Chinese – there’s precious little in the way of surprises or other aspects which might stick in your memory.