Dir: Joe Oakes
Star: Audrey Landers, Judy Landers, Jan Fedder, who was in Das Boot.
No, seriously: they mention that explicitly in the opening credits.
a.k.a. Deadly Twins 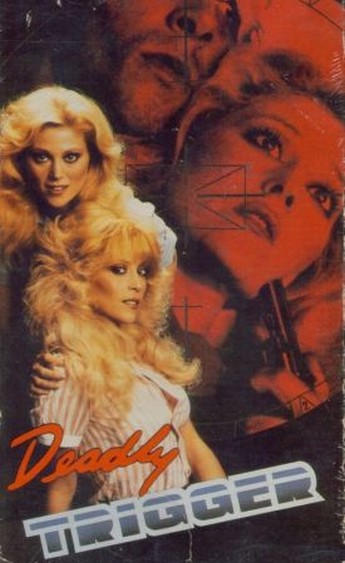 I can only presume that writer-director Oakes was fucking both Landers twins, because there’s no other way to explain this rancid mess of a film. They play – hey! – twin sisters Polly and Ruth, who move out to Cologne to pursue their career as really bad disco singers, only for them to be the victims of a car-park assault, triggering a miscarriage in Ruth, a tragic fiery car-crash for her boyfriend as he drives to her aid, and a subsequent suicide attempt that leaves her confined to a wheelchair. Ze German cops can’t do anything, as the attackers give each other alibis [I guess forensic evidence is just an American thing], so Polly comes up with a whacked-out plan to lure the ringleader into an armed robbery sting. Not that she bothers to disguise herself when she goes to meet him: I guess rapists have the memory of goldfish, at least when it comes to enormous haired American lounger entertainers. The scheme doesn’t got to plan: god forbid, that might actually be interesting. No, instead, it leads to a credible contender for the world’s least exciting chase, which includes a pair of German parkour cops getting de-pantsed by the villain, and just about every method of transport you can think of. It’s not as amusing as it sounds.

There isn’t a single aspect which is not inept, and it only dodges Incredibly Bad status by dint of being excruciatingly tedious, particularly in the second half where it abandons the Doublemint Twins almost entirely. That does count as a surprise, since in the first half, you’d have been begging for this cold shoulder, especially during their stellar song numbers. The only comparable double-act in cinema history was Liz Hurley and Patsy Kensit in Kill Cruise, and Hurley abandons her performance, in favour of stripping (rather better received, obvs!). This corner of Germany appears to feature no actual Germans, apart from the guy who was in Das Boot, and while there does appear to have been a non-zero amount spent on the production (those helicopters don’t fuel themselves, for instance), there is little or no indication anyone involved could work up the necessary talent and/or enthusiasm to figure out what they should do with it. Probably the worst thing to come out of Germany since that guy with the moustache.