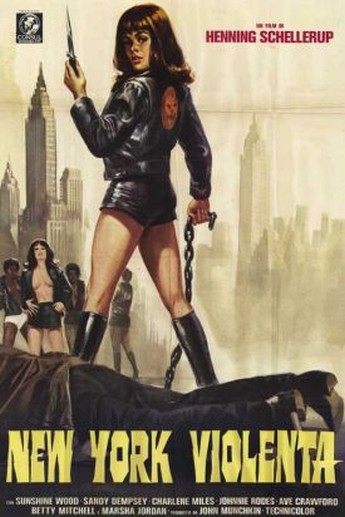 The first 10 minutes of this are Exhibit A for the difference between “true” grind house cinema, and the faux modern imitations pedalled by the likes of Robert Rodriguez (hello, Machete Kills) – the poster, right, is probably Exhibit B. A group of “schoolgirls” – quotes used advisedly – are chased by a gang of street thugs, cornered in a lock-up and brutally raped, at length. After this memorably nasty opening, they tool up, acquiring guns and martial-art skills (“Ripping the groin away!” yells their African-American and afro’d teacher enthusiastically, apparently a little vague on the philosophy which teaches that violence is a last resort, rather than a starting point from which to begin your journey). Equipped with the necessary skills, they can proceed to extract their vengeance… Consisting, I kid you not, entirely of pantsing their attackers. As one of the girls yells at the end of the film, “That’ll teach ‘em not to fuck with The Black Alley Cats!” Yeah, that’s I Spit on Your Grave giving a groan of disappointment from the corner.

Somehow, things still manage to kinda go downhill from there, devolving into a silly (to put it mildly) story. When not at school, dodging their predatory lesbian headmistress, the girls form a vigilante group sporting nifty black leather jackets and masks, and take on other wrongdoers, such as the couple who drug and molest their babysitter – who knew they had MDMA in 1973? Though let’s be absolutely clear: this is no more than a thinly-disguised excuse for copious amounts of seventies sex, somewhere between soft and hardcore, and with all the pubic hair and ugly men this entails. What has not apparently changed in forty years is bad porn acting, everyone involved delivering their lines with the dramatic intensity of a GPS system. There is a certain grubby quality to proceedings, and it’s certainly easy to imagine this being screened at some 42nd Street den of iniquity and sticky floors. However, I’d be hard-pushed to claim this has merit on any more salubrious levels, and outside the genuine unpleasantness of how this begins, I doubt there’s much that will stick in your mind.