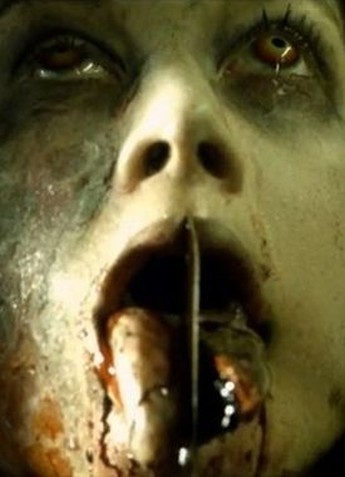 This remake does at least have some point, unlike certain of its ilk, in that the original movie had some obvious flaws, in terms of production values, that can be addressed with major studio backing and a budget roughly 50 times bigger. That’s good, and there are certainly some moments which are easily a match for Raimi’s horror classic in terms of splatter and wince-inducing violence on the human form. The claim is that this is a continuation of the saga, more than a “remake,” but I don’t think anyone is truly fooled by this. It’s “spam in a cabin,” to use Joe Bob Briggs’ great phrase, and the sole plot twist of note is that four of them are there to help the fifth, Mia (Levy) get off drugs. Which is part of the problem, because it appears that the symptoms of cold turkey and demonic possession are similar enough to cause confusion, after they discover a cellar containing a book from which the nerdy one (Pucci) reads a passage, and all hell (or, a significant faction thereof) breaks loose. Oh, those kids: will they never learn that there are some things with which you just aren’t meant to meddle?

This is old-school in its approach, which is both refreshingly straightforward (a particular yay for the lack of CGI) and something of an issue, because the landscape of horror has changed significantly in the 30+ years [damn, is it really that long?] since the original came out. Audiences now are a lot more cynical and self-aware, and expect the same from the characters: it’s harder to forgive some of the dumber actions seen here, in a “modern” movie, where people are supposed to know better, and it’s easy to see what Cabin in the Woods was parodying. On the other hand, this is certainly not softened for a mass audience, as it could well have been, and has been Raimi’s direction, almost consistently since making the original. The other problem is the lack, not so much of Bruce Campbell specifically (though stick around through the credits for a pointless cameo), as anyone Campbell-like. His Ash has a great character arc, while Mia never develops to the point where we warm to her. Generally, I have to agree with Richard Roeper, who wrote “It’s an irredeemable, sadistic torture chamber reveling in the bloody, cringe-inducing deaths of some of the stupidest people ever to spend a rainy night in a remote cabin in the woods.” Except, he said that, like it’s an entirely bad thing.