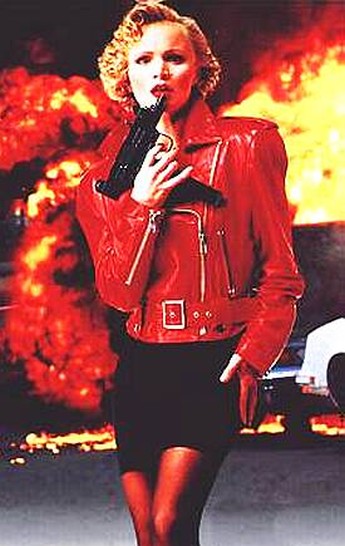 [22] The “renegade robot” subgenre of violent totty is surprisingly common and, as perhaps the first, this was a remarkably influential B-movie, with Long Kiss Goodnight in particular borrowing the ‘accidental’ triggering of dual personas (one motherly, the other aggressively slutty) and the wise-cracking black sidekick, but Species and Barb Wire also appropriate elements. Renee Soutendijk is both single-mom scientist, and her nuclear-laden, gun-totin’, android creation. Government agent Gregory Hines has to track the artificial one down, despite it possessing far better dress sense than its dowdy mentor – and it’d be much more fun on a night out. When bullets are flying, the film really motors; between times, Hines shoulders the burden of interest with a nicely dry performance which helps divert attention from the obvious plot holes. Trivia note: director/writer Duncan Gibbins died trying to rescue his cat in the ’93 Hollywood fires.

[11] The latest entry in the ‘fetish thriller’ sub-genre (check out the video cover, right) has Soutendijk playing both a scientist and the robot, Eve, she’s developing, loaded with her memories. After being shot in a bank robbery during testing, Eve goes AWOL and starts re-enacting her creator’s life the way it ‘should’ have been. Hines is the army man called in to track Eve, since she also happens to carry a ticking nuclear device. Lots of good touches: Eve’s shredding of any man who uses the word ‘bitch’ (fortunately, she doesn’t meet Ice T), Hines’ nicely cynical edge, and Soutendijk (as Eve) brings much the same weirdness to her role as she did in The Fourth Man. While these parts doesn’t really gel to anything more than entertainment, I’ve seen a lot worse. C+