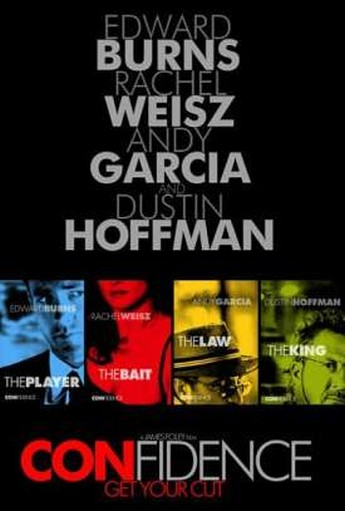 Jake (Burns) leads a gang who unwittingly con 150 grand belonging to the King (Hoffman), a gangster with ADHD and a nasty reputation. Rather than pay it back, Jake convinces him to let them scam five million out of a crooked banker. Which is, of course, where the fun really starts. Burns comes over very much as a low-rent model of Ben Affleck, and oozing the titular attribute, even if you only occasionally get beneath the veneer. The moments when you do, however – such as his hatred of red-heads – are usually telling. Weisz appears to have wandered in from a Dashiel Hammett novel, or is perhaps channelling Sean Young from Blade Runner, it’s hard to tell. Hoffman appears to share the same visually defective barber as Garcia, playing the federal agent hot on Jake’s tail, but the mobster has the best lines and is more authentically creepy.

The film works hard to surprise, but in this genre, you go in expecting the unexpected, and it’d be far more of a shock if someone actually was what they seemed to be. Every character is playing a role, distancing the viewer, since all emotion becomes suspect – just another move in the chess game that Jake refers to more than once. The necessary twists are delivered, and while you won’t find much to mark this above others of similar theme, the technical aspects of the con are soundly portrayed, and a good scam, artfully executed, is something always worth another look. Think of it as Mamet without the verbiage. I’ll leave it to you to decide whether that’s a compliment.