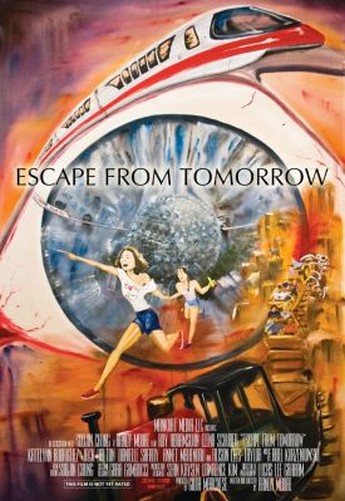 Just before his family is about to enjoy a day at Walt Disney World, Jim (Abramsohn) gets a call from his boss, telling Jim he has lost his job. He goes ahead with the visit anyway, but the day slowly unravels from there. His path is frequently crossed by a pair of French teenage girls, the rides at the park take on a surrealist air, and after he fights with his wife, Emily (Schuber), she leaves the park with their son, leaving him with their daughter Sarah (Rodriguez). He meets another apparently single parent (Lees-Taylor), and enjoys a brief fling back at her hotel. But that hardly resolves his underlying issues, and after the family re-unites for an evening trip to EPCOT and the fireworks show that ends the night, things start to get really weird. Probably best if I say nothing more. The hook here is that the film really was filmed, guerilla-style, in Disney’s theme parks, both on the East and West coasts, and without the company approving or even knowing: the cast and crew bought entrance tickets like anyone else, and music like It’s a Small World was replaced with similar-sounding songs. The corporation has basically ignored the movie – probably wise, as any lawsuit would seem to be on thin ice, and certainly bring the production more publicity.

As for the film itself, it is certainly a unique creation, but works considerably better in the early going, when it depicts the true horror of the self-proclaimed “happiest place on Earth,” especially for someone like Jim, whose life is increasingly falling apart. From that direction, I can easily see how standing in long lines with troublesome children, the crowds and the relentless cheerfulness on view, could provoke a reaction such as Jim’s binge-drinking in the German section of EPCOT. I’ve been to Walt Disney World with small children, and can see how the large-scale consumption of alcohol would appeal. Moore might have been better simply to concentrate on these more prosaic horrors, instead of spinning off into a surreal world of experimental chambers under the park, rampant disease and corporate cover-ups, which feel like something Terry Gilliam and David Cronenberg might have concocted at the end of a night down the pub. And, I suspect, discarded the next morning as a bad idea. Not that we regret seeing this: there were easily enough squirm-inducing moments of self-recognition to make that worthwhile. It’s just not a ride we’re interesting in taking agian.