Bale is one of those relatively rare Oscar winning actors, happy to get his hands regularly dirty in genre roles at which many thespians would turn up their noses. Never mind playing both Batman and John Connor, he also appeared opposite fellow future Acadamy honoree Matthew McConaughey and a host of CGI dragons in Reign of Fire. There, he helped elevate material that, let’s be honest, was SyFy Original Movie level, and turned it into a surprisingly fun time. And later the same year, Bale would give us Equilibrium, the perfect film for anyone who read Brave New World and thought, “That was alright, but it needed more samurai swords.”

Just me, I guess. 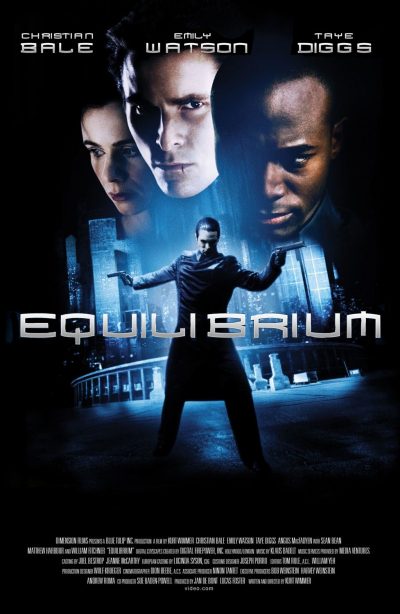 It’s set in a future where all emotions have been suppressed, it having been decided that the negatives of anger, war, hate, etc. outweigh the positives. This is ruthlessly enforced by the Tetragrammaton Council and their Clerics, who scour the land, destroying any material condemned as “EC-10” for emotional content, and the “sense offenders” who hide it. To maintain the status quo, everyone is dosed regularly with Prozium II, which deadens their feelings. The focus is John Preston (Bale), a Cleric whose wife was executed for being one such sense offender – not that it bothered him at the time – and now a single father to two kids. Through a series of unfortunate events, he ends up off his meds, and becomes increasingly sympathetic to the resistance movement.

Checking out a few reviews, seems a number of people have issues with the concept here, often under the mistaken assumption that pointing out moments when the characters show emotion is some kind of fundamental flaw. It isn’t, a) because Wimmer has explained that Prozium doesn’t extinguish feelings, just suppresses them, and b) like any good totalitarian regime, the state of Libria exists on the tacit ideology, “Do what I say, not what I do.” Dupont’s well-appointed office, for example, make it very clear that the proscription of art does not apply equally to everyone. [On the other hand, there is a case to be made that emotions are actually a dictator’s best friend, especially if you can direct them to your ends.]

For this and/or other reasons (its remixing of elements from The Matrix, BNW and 1984 being a common complaint), critics generally disliked it, yet audiences responded better. At Rotten Tomatoes, it’s only 38% fresh with critics, in contrast to an 81% audience score, and a rating of 7.5/10 on the IMDb. Personally, I love it. I think Equilibrium has stood the test of time remarkably well; likely better than The Matrix. The antagonists here are clearly modeled on the Nazis, from the national flag through to their sense of architectural style – Wimmer shot in Berlin for good reason. But I can’t help noting, the Librian philosophy of suppressing things which provoke “bad” emotions, seems scarily relevant in a society where people think their being offended should be everyone else’s problem. [Literally while writing, I saw this headline: “Woman says Hobby Lobby’s cotton display is offensive”]

What everyone who has seen the film remembers, is the “gun kata,” the martial art developed by the clerics. To quote Vice-counsel Dupont (Macfadyen), “Through analysis of thousands of recorded gunfights, the Cleric has determined that the geometric distribution of antagonists in any gun battle is a statistically predictable element. The Gun Kata treats the gun as a total weapon, each fluid position representing a maximum kill zone, inflicting maximum damage on the maximum number of opponents while keeping the defender clear of the statistically traditional trajectories of return fire.” Which is a long-winded way of getting round the usual problem of martial arts in a world with guns – thus still allowing Bale to kick arse and look extremely cool while doing it.

And kick arse, he does, the body count here being right up there with Rambo [and I mean the 2008 remake]. The final sequence – if I say the words, “Not without incident…”, anyone who has seen it will know what I mean – is utterly glorious. Cleric Preston rampages through the complex, using his gun kata against a horde of lower-level cannon fodder, before entering DuPont’s office, where he and Preston’s partner, Brandt (Diggs), are waiting. You expect the Preston vs. Brandt fight to be epic, after a sparring session between the two earlier. It is, though not quite the face-off you expect. It’s certainly memorable, and seals Preston’s credentials as the undisputed Librian heavyweight champion of tersely efficient and incredibly badass motherfuckery. 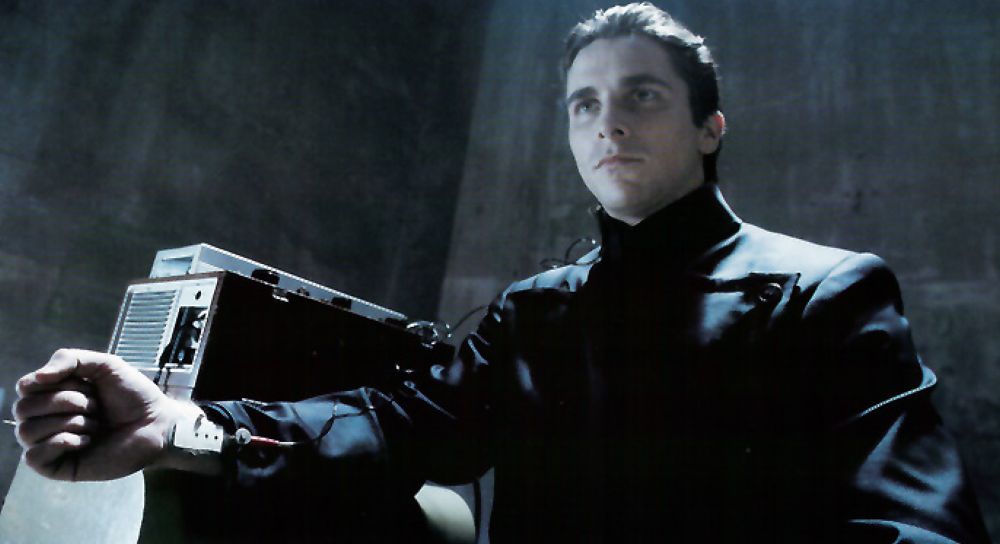 Yet this is far from being a mindless action movie, with Wimmer bringing on-board topics as diverse as self-medication and religious authority. The performances are excellent as well, led by Bale. There’s a little of his Patrick Bateman from American Psycho here, hiding an extremely dangerous character behind a facade of bland normality, punctuated by bursts of intense ultraviolence. It’s perfect casting for the character and remains, to this day, Bale’s iconic role as far as we’re concerned. But there’s also the unexpected presence of Watson, who had worked with Bale previously on Metroland, and already received multiple Oscar nominations under her belt. Playing a sense offender who helps Preston question his obedience to the established authority. she is the film’s emotional heart, and helps gives this more wallop than you’d expect.

I love the look of the film too, under production designer, Wolf Kroeger. This was a relatively small production, with a budget of $20 million [The reason the theatrical release was so limited, was because pre-sales of the movie had already turned a profit, and the producers didn’t want to risk going double or nothing on promotion, prints, etc]. Yet every cent of value is squeezed out, using existing infrastructure such as the Deutschlandhalle, a now-demolished venue built for the Berlin Olympics, in a thoroughly convincing depiction of a futuristic fascist dystopia. The sets are only one aspect: just about everything, from the clothes through to the office layout, enhances the grimly totalitarian feel.

It’s not perfect. For example, the use of a puppy as a sympathetic plot device is cringe inducingly obvious – though may have been a significant influence on John Wick. And I guess it’s comforting to know that 1998 Cadillac sedans will survive World War III like cockroaches, in mint condition, and be in demand no matter how fascist the future may become. But the positives here are massive, and it remains one of the best combinations of brain and brawn, backed by the excellent performances, ever to hit the screen.

[Original review] Heard nothing about this before release. Not a trailer, not an interview, not a word, it doesn’t even have an official website. Yet it’s still a certain contender for action movie of the year: it’s hugely refreshing to see one that actually has a thought in its head, even if that thought was wholeheartedly looted from 1984 and Fahrenheit 451. The future here is one where emotions and everything likely to cause them – art, poetry, beauty – have been outlawed, as the cause of war and other bad things. Enforcing this, with the pharmaceutical aid of Prozium, are the clerics, led by hotshot Preston Smith (Bale). He is so cold, he felt nothing when his own wife was executed, and has no problems dispensing the same justice to his own partner. That is, until events prevent him from taking Prozium, and the whole range of human emotions come crashing down on him like a tidal wave.

Bale is perfect for the role, and is excellent at the small acting necessary; you can see things flickering behind his eyes. The look of the film, too, is great, a grey monolithic future where only renegades feel anything. Smith is out to find these resistors, but who is manipulating who? The action sequences are excellent, featuring “gun kata“, stylised movements mathematically calculated to make the master of them almost impossible to shoot. The results are a welcome twist on the usual post-Matrix copies, most notably one of the coolest deaths-by-sword in a long time. The narrative is occasionally clunky and, as noted, should be largely familiar to anyone who did O-level English. But if the York notes have been checked out of the local library – most likely by writer-director Wimmer – this is a far more entertaining alternative. B+