“I’ll take Titles You Won’t See In Walmart for $200, please, Alex.” This low-budget horror is entirely unapologetic about its aims and goals, opting to strip things down – often literally – to the bare essentials. A group of teenagers go camping in the woods, and are slaughtered by a monster, which appears to be attracted by the pheromones given off during sexual activity – hence the title. Why is the monster there? Why does it continues to hunt the group, even after all thoughts of sex have evaporated? Who cares! No explanations are ever offered, the film opting to concentrate its energies in other areas than backstory. Or, let’s be honest, story of any kind: if you chop the (largely unfunny) blooper reel off the end, what you have barely squeaks past an hour of running-time. 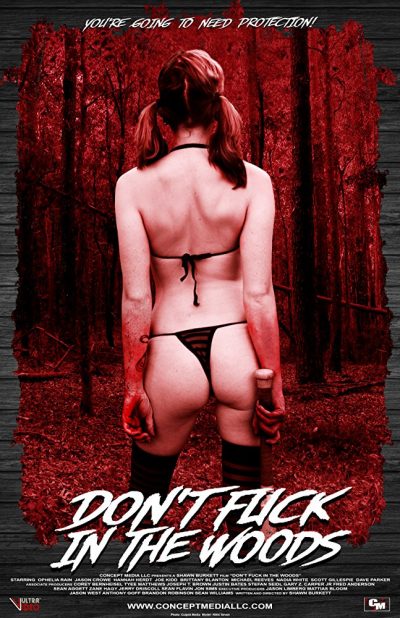 This is a mixed blessing. Economy and efficiency are always to be praised. That’s especially so, since most of the performances here are functional at best, and the less seen of them, the better. The best is likely Blanton as final girl Jane – not least for coping when the film inexplicably decides in the last reel, that it suddenly wants to be Predator, right to down to aping the soundtrack. There, Blanton does a better job of mimicking Arnold Schwarzenegger than anyone has a right to expect. Everyone else runs the full range of emotions from A to… B. As in, from annoying to bland. This may be a loving tribute to the 80’s slasher pics which are clearly the inspiration, or more likely, simply reflects the shallow pool of acting talent available to the makers.

The main positive is the enthusiasm Burkett brings to the mayhem. Particularly worthy of note is the shot from inside a victim’s torso as it gets ripped open by the monster. I haven’t seen that before, so well done. Generally, there’s no shortage of gore – and it’s real fake blood, rather than unimpressive CGI –  while the monster looks rather better than I expected. The second half, where things kick off properly, is a good deal more effective than the first, when you have to sit around and watch the characters chatting about whatever. In particular, I could have done without the video-store debate about what constitutes a scream queen, which seems to have strayed in from a Kevin Smith film, by way of Quentin Tarantino’s waste-paper basket.

Despite some issues with the pacing, the makers deliver exactly what you would expect from the title, providing the three B’s beloved of Joe-Bob Briggs: blood, breasts and beasts. I must also confess to laughing like a drain at the horror twist on the classic scene from Fast Times at Ridgemont High, where someone’s fantasy jack-off session gets rudely interrupted. That scene alone meant the 60 minutes spent watching this were not entirely wasted, and any other pleasures were gravy. While I’d prefer Burkett rein in the fondness for self-indulgent dialogue, on balance, I’d not be averse to watching more of his output in future.