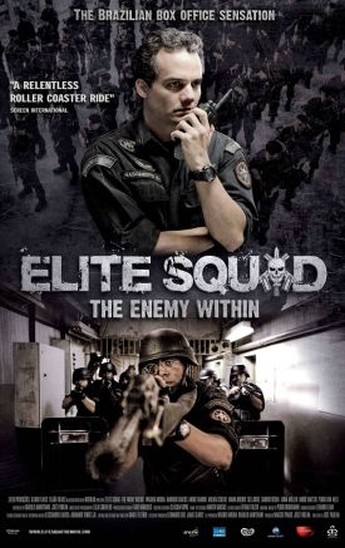 The odd re-titling for the US market, is because the original didn’t get as big a release, and if it had been called a sequel, that would likely have limited the market. You certainly don’t need to have seen its predecessor to enjoy this, which sees Lt. Col. Nascimento (Moura) promoted out of uber-police force BOPE for political reasons, after a raid on a prison causes a PR scandal – even though all the hostages were released unharmed. Still, he uses his new powers to enforce the zero tolerance policies for drug dealers we saw in the first film, and succeeds in flushing them out of the Rio slums. The bad news is, the vacuum left behind is rapidly filled by an even worse adversary: a cabal of corrupt cops from the regular police, and local politicians, who seen an opportunity to exploit the population to win elections. Nascimento finds an unlikely ally in Diogo Fraga (Sandos), a human-rights advocate, who was responsible for the initial PR scandal, but is now one of the few politicians brave enough to buck the tide of widespread collusion.

It’s definitely painting a bigger picture than its predecessor, and does engage more in shades of grey, which does diminish the effectiveness to a certain degree (I won’t deny it’s likely a more realistic depiction of life; however, we’re talking cinema here). It’s a shame Nascimento is largely sidelined, as his single-minded relentlessness was one of the most enjoyable things from the first, though Padilha has lost none of his cynicism about politics and “the system”. That’s made explicit by a voice-over that’s pretty relentless: normally, that kind of thing sets off warning bells, but since Nascimento is more s spectator, is probably a necessity. There’s still the same sure hand on the action, most notably when Matias (Ramiro) is ordered to take out one of the few remaining slums not ruled by the political-policial cartel, which is a pulse-pounding set-piece with a nasty sting in the tail. It is nice to see a sequel possessing a genuine sense of development and progression, as this does; not all the directions it takes are necessarily welcome, but I’m certainly intrigued to see what Padilha can do with the Robocop remake, on which he’s currently working.