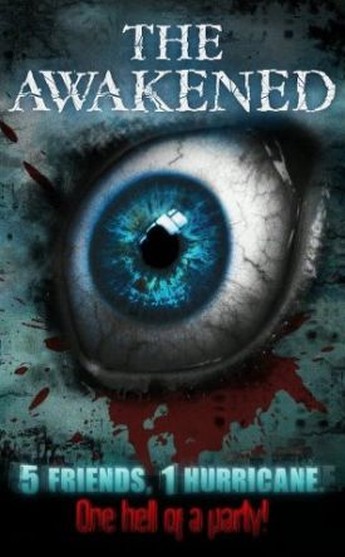 With a hurricane bearing down on Miami, five friends hole up in a house, barricade the windows and prepare to sit out the storm, having loaded up on enough Corona and associated Corona products [let’s just say, the product placement here isn’t exactly what you’d call subtle] for the night. The main power soon goes out, taking with it most forms of entertainment, and also the cellphones; after running out of conversational topics, they opt to restage a spiritual healing ceremony one of them went through recently, I guess they couldn’t find a ouija board in the cupboard for the usual seance. Needless to say, this doesn’t go well, and as the title suggests, something is awakened by their ill-considered dabbling. It seems upset, and the residents of the house fine themselves unable to leave, as the unseen presence assaults them.

Despite my sarcasm, this isn’t awful. However, its micro-budget origins are ill-concealed, with a single location and an evil spirit which conveniently turns all the lights out before doing anything nasty, thereby removing the need for any of those pesky (and expensive) visual effects. The former does work for the movie to some extent, generating a claustrophobic atmosphere, and the tensions that result between the ill-matched companions are credible. On the other hand, having all the deaths happen effectively off-camera feels far too much like a cheat: you can get away with it once, no more than that. The performances aren’t bad, with Pitts decent enough as the lead, and the rest of the cast sympathetic or irritating as appropriate. However, what you have here barely gets above PG-rated horror, with far too much restraint to be properly effective.