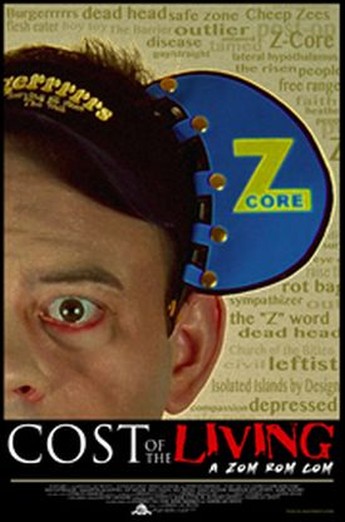 This film is less concerned with the zombie apocalypse than the aftermath, when most of the zeds have been pacified, and trained to perform menial tasks in society. However, there are still feral packs of unmodified creatures outside the city, and the rich have decided to uproot and head offshore, to live on artificial islands. It’s an uneasy situation, with some members of society abusing the unfortunate victims, and others convinced they are an abomination against God, that need to be taken down. In the middle of this stands Andrew (Killavey) and his new girlfriend Emily (Nicklin): the former lives outside the walls and safety of the city with his sister, who hates the zombies with a passion, while the latter still keeps her pacified, undead mother around the house. Nothing good can come of that, needless to say. There’s also Emily’s ex-boyfriend, a sleazy salesman of those islands who wants out of town, with or without her.

The opening credits are really, really good, a mix of viral videos, news reports, commercials and other found footage that sets the scene brilliantly. That’s about the zenith of the film, though there are other, nicely worked ideas to be had here, such as the religious justification for killing zombies – basically, Jesus is the only one allowed to come back from the dead, and everything else is blasphemy. It might have been better not to give itself a subtitle which sets the bar for comparison too high, and perhaps unrealistically. For this is no Shaun of the Dead, with the rest of it not up to the same high standard set by the opening. That’s particularly true with regard to dialogue which frequently seems unnatural and stilted, perhaps because it’s badly delivered in terms of timing: more than once, we were mouthing the expected line, well ahead of the characters.

At over 100 minutes, this is likely too long; not through any shortage of ideas, but because the “rom” aspects are overdeveloped compared to the “zom” and “com”. That’s another aspect which Shaun handled much more deftly, striking a balance and blending the elements with little apparent effort. However, credit is due for the makers not just churning out another low-budget zombie apocalypse, instead preferring to go through that and see what the world might be like on the other side. While their vision is clearly satirical to a degree, it’s not too far from possible truth, with the zoms becoming a source of cheap labour to be exploited, resulting in societal tensions. Rein in your expectations, i.e. forget Shaun of the Dead, and this will be a suitably different take on the genre.