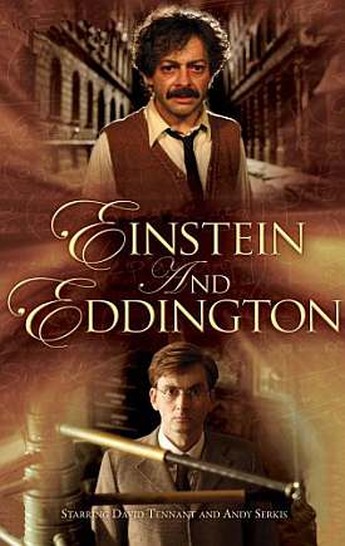 Set against the backdrop of the first World War, Serkis and Tennant play the titular scientists, separated by fate, but who end up collaborating in an effort to prove the truth of Einstein’s work, that challenged the long-held, Newtonian view of the universe. Both are renegades in their own ways, opposed to the jingoistic tone of the time: Eddington, objecting to the war for religious reasons, while Einstein is simply an individualist, who has no interest in directing his research to the ends demanded by the German war machine, even after he is brought to Berlin. It’s that which brings Albert to the attention of his Anglo counterpart, despite the disdain of the English colleagues, who can’t bear the thought of anyone disproving Newton – least of all a Hun. The pair’s talents mesh, with Einstein the theorist and Eddington, the “best measurer in England,” able to carry out the experiment which will show the fractional difference between the Newtonian universe and the Einsteinian one.

Despite the heavy science present as a motivation here, the tone is deliberately kept light – you don’t need a background in theoretical physics to enjoy this one. There is a somewhat clunky demonstration of the curved nature of space, involving a tablecloth and a loaf of bread, but it’s not really necessary, for this is more about the lives of the men who made the science. Einstein, a brilliant intellectual, but unable to hold his marriage together; Eddington loves his country, but hates the war in which its involved, and the personal loss it brings. These are both admirable characters, but it’s Serkis who really brings his to life, capturing the spirit of the eccentric genius; it’s easy to see why he became a legend. An HBO/BBC co-production, it has the quality you’d expect, and if occasionally becoming a little too preachy my personal tastes, it’s engaging and humanizing look at both the most famous scientist of the 20th century, and one who has been almost forgotten, yet played his essential part.