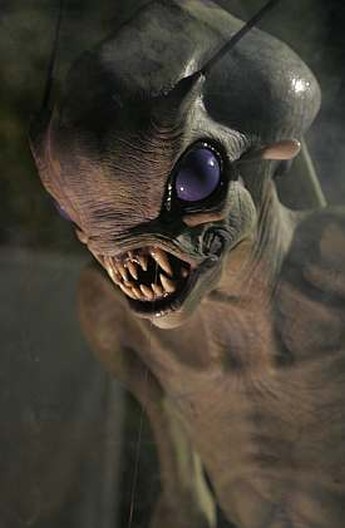 Funded by a Powerball winner, filmed in 2005, finished in 2008, and finally seeing release now, this is a fairly-shameless ripoff of Predator, except with teens replacing the Marines. I am fairly willing to bet that the cast here does not include two future governors, but you never know. Sawa plays Andrew, plagued by nightmares of an uncle, a pilot in the Air Force, being experimented on by aliens. To try and work through these issues, he has assembled a group of friends for a weekend spent off-roading, flirting and bickering. Unfortunately, the plans are interrupted by the arrival of the titular creature, who is out to collect samples of humanity, and wears a hat and a coat. Yep. The more cynical among you may say this is to hide the crappiness of the FX, but once you see the CGI version, you’ll feel the earlier version possesses a certain naive charm in comparison. Really, given producer Andrew Whittaker won $314m in the lottery, I have to feel he could have ponied up a few more bucks there.

Anyway, I’m sure you can work out how things go from here, so I won’t bore you with the details. If only the film had shown such consideration to me. When you try and imitate a genre classic, you had better be capable of, at least, coming somewhere close to emulating it, and this fails to do so. The characters are, outside of Andrew, immensely irritating, with their relentless whining at each other. Stouffer lacks either the resources or the will to show the predator alien at work, persistently cutting away when he needs to be delivering the groceries – if he’s going to make those in the film so annoying, the audience deserves to see, in great detail, them suffering painful and grisly demises. Sawa is not entirely awful, and the physical alien (not to be confused with the really-awful CGI one that dominates the second half) is not a bad creation, resembling a giant locust with teeth, and with what appears to be a spine as a throwing weapon. If you think that’s enough to make a movie, you have fun.