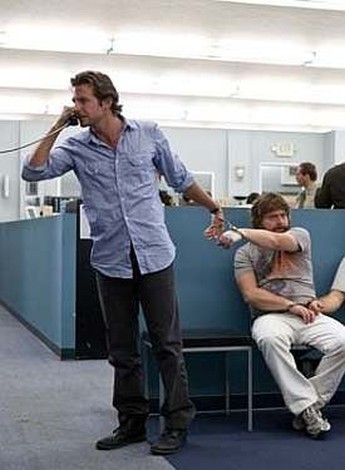 While amusing enough, and certainly inoffensive, this wasn’t as funny as I expected it to be. This is perhaps less the movie’s fault, than the fact that by the time it made its way in front of my eye-balls, it had already proven a box-office smash, and was touted as the widely funniest comedy of the year. I was thus expecting something that would have me rolling on the floor, but I think I had already seen most of the funniest moments on YouTube. Oh, it’s mostly amusing enough, but in a smile-provoking, rather than side-splitting, way. Four guys head to Las Vegas for a last taste of freedom for Doug (Bartha) before he gets married. They end up taking roofies instead of ecstasy, and wake up the next morning with no memory of the night before. The suite is trashed, there’s a tiger in the bathroom, Phil (Cooper) is wearing a hospital bracelet, Stu (Helms) is missing a tooth and they appear to be in possession of a police-car. Oh, and Doug is flat-out missing. Can they piece together what happened and recover the groom in time to get him back to Los Angeles for the wedding the following day?

The humour comes from the characters, who are an engaging bunch of guys, easy to like and follow – especially weirdo Alan (Galifianakis), who mournfully proclaims, “I’m not supposed to be within two hundred feet of a school. Or a Chuck E. Cheese.” The interplay between them is more amusing than most of the external characters who seem painfully forced and stereotyped: the “escort” whom Phil ends up marrying, the little Asian guy they find trapped in the car-trunk, and even the “surprise” celebrity cameo, which wasn’t any surprise by the time I got to it, was almost completely pointless. These diversion dilute the genuine comedy present in the movie, to the point where, while the time passed quickly enough, I don’t have much interest in seeing it again. Though I am waiting for the next time someone asks me directions, purely so that I can reply with the film’s most memorable line: “It’s at the corner of Get a Map and Fuck Off.”