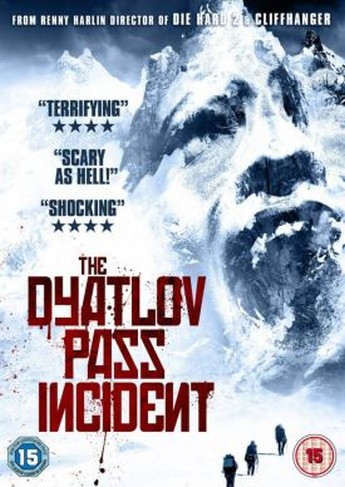 The titular event did happen, when in 1959, nine hikers were found dead in remote area of the Russian mountains. Some had crush injuries, others froze to death and one corpse was, bizarrely, radioactive: it remains one of the greatest mysteries, a land version of the Marie Celeste. The film depicts an expedition, by a party of five University of Oregon students, to investigate the event by returning to the site. Even before they get out of civilization, odd things start to happen, with their efforts to interview the sole survivor are stymied, under mysterious circumstances. But the deeper they get into the wilderness, the weirder things get: they hear unexplained noises; their camp is “visited” by something that leaves mysterious footprints, and a weather station holds a particularly nasty surprise. They reach the pass in impossibly quick time, and leader Holly (Goss) over-rides the concerns of the guides, who want to pull out immediately and not stay the night. However, when she makes an inexplicable discovery in a snowdrift, it opens a door to the real explanation of what happened.

If you thought the “found footage” variety of horror had finally died a natural death, here’s Harlin to prove otherwise – at least the camera operators here are largely competent, so this won’t be quite as likely to generate motion sickness. Well, until the end when the usual conceit applies, of a cameraman who holds on to the camera well beyond what would be sensible. Still, up until that point, there are occasional moments where this does generate the required chill within the bones, or even as the film attempts to provide its explanation – though, as usual, that is nowhere near as interesting as the mystery it supposedly explains. There’s good use of locations, Goss is a decent lead (until a third act where her role is reduced to running and screaming) and it’s interesting to see Harlin back in the mountain landscapes he explored in Cliffhanger. But by the end, it had exhausted most of the initial promise afforded by a baffling event, and become just another entry in a genre that, for me, had gone past its “best before” date by the time Paranormal Activity 2 appeared.