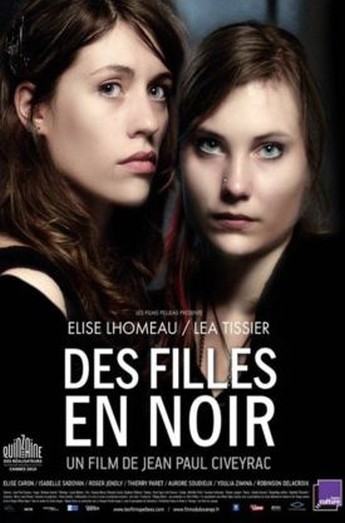 The title translates as Young Girls in Black, and is a pretty-accurate summary of an intense personal drama, which is easier to respect or appreciate, than enjoy and like. Noemie (Lhomeau) and Priscilla (Tissier) are two teenage Goth girls, deeply disenchanted with… Well, just about everything. Their classmates suck, mocking their project where they perform poems by 19th-century writer Heinrich von Kleist, who joined his partner in a suicide pact. Their parents suck. Life, not to beat about the bushes, sucks. Noemie has already made one attempt to kill herself – it’s that failure which opens the movie – and they decide to end it all, imitating von Kleist in an act that will demonstrate to the world the futility of it all. However, this poses problems both practical and emotional: the local pharmacist refuses to have over the sleeping-pills required for the attempt, and there are still also family obligations to be met, which separate the girls on the night scheduled for the attempt. Fortunately, this is modern life, and cellphones allow them to co-ordinate, despite the distance between them.

I’m reminded of the Heathers quote: “Dear diary, my teen angst bullshit has a body count.” Except that the intensity of the performance here is often difficult to watch, especially for someone like me, who is generally pretty phlegmatic, and floats through life without significant highs or lows. I mean, my youth wasn’t all flowers and rainbows, certainly, but suicide never crossed my mind. Seeing people come to the conclusion that it’s the only way out is pretty uncomfortable viewing, and much credit is due to the two leads for conveying that in a sympathetic way. However, the second half of the film is considerably less successful than the first, though it’s difficult to be specific about the reasons for this, without major spoilerage: let’s just say that the dynamic at the heart of the film is removed, and nothing comes in to replace it. Civeyrac has a rep as a devotee of Cocteau, though this is definitely more grounded in realism, albeit still with elements of obvious symbolism, such as the kicking-over of a chess board. Unmistakeably French, it’s the kind of film I’m glad to have seen, yet don’t have much interest in seeing again.