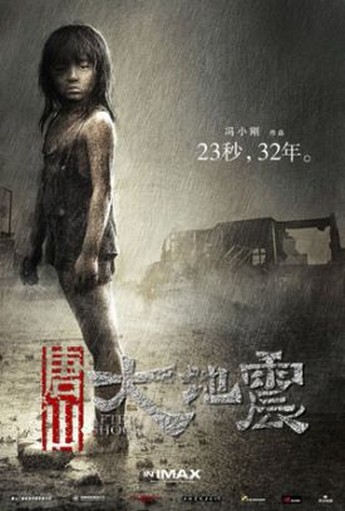 The 1976 Tangshan earthquake was one of the great natural disasters of the 20th century. Estimates of the death-toll start at a quarter-million and go up to three times that. It’s that tragedy which opens things here: Lu Yuanni (Xu) loses her husband and daughter, forced to make a devastating “Sophie’s Choice” to save her son, Fang Da. Except, it turns out, the daughter, Fang Deng, isn’t dead. In the subsequent chaos, Deng ends up getting adopted, and grows up (played as an adult by Zhang, unaware that her mother is spending her life racked with guilt at the decision she had to make. We check in with everyone about every decade, until 2008, by which point Deng has emigrated to Canada with her husband. But news of another Chinese earthquake, this one in Sichuan, brings Deng back to China, to help the rescue efforts, and a chance encounter there opens the door to her past.

It’s a sprawling kind story, as you’d expect, given the 30+ year span over which it unfolds, but it’s an interesting twist on ‘disaster porn’, in that it gets the mayhem and carnage – very well realized, I must say – out of the way almost immediately. It’s much more a drama, interested in the effects the tragedy has, as described in the title. As such, it works quite well, with Zhang’s performance holding things together, and you can see why it was deemed worthy of being China’s official Oscar entry fomr 2010. However, the structure leaves inevitable huge gaps in proceedings, and there are a couple of moments which fall horribly short – the heroine’s husband, for example, appears to have been cast by the makers hiring the first gwailo they found outside the studio. Particularly in the early stages, it seems none too subtle on the propaganda front, with how Tangshan was rebuilt into a golden wonderland where everyone is (apparently) completely happy. Still, come for the massive earthquake, stick around for the family drama.