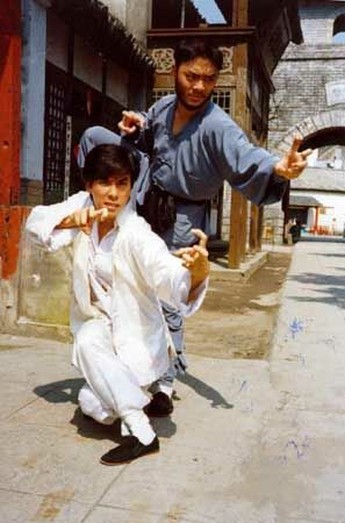 The director seems to have employed most of his clan, one way or another, in Donnie Yen’s first starring vehicle. It’s an odd mix of physical comedy and Kung-fu Plot #1 – “You killed my father and you must pay”. Yen looks kinda uncomfortable with the humour, perhaps because his character is a spoiled brat, albeit one with a heart of gold, meaning much of it has a tendency to come off as cruel instead of funny. Still, it’s impressively busy and very inventive, with never a dull moment, even if it’s just listening to a dub which captures the period atmosphere with lines like “Your ass is grass, man!”

One escapade will not only have you swearing off Chinese fireworks, it also triggers the murder of his father and brother, by a mute hired killer (Yuen Hsin-yee) who builds furniture with his head(!). Yen finds refuge with a puppeteer (Yuen Cheung-yan, looking like a crack-crazed version of Ken Dodd) and his fat but agile wife (Shum). Things slow down a little at this point, despite a surprising subplot where the killer turns out to care deeply for his little girl, though this is largely thrown away. Otherwise, the middle part is given over to inescapable training sequences, which will be far too familiar to any modern viewer. There’s not much “drunken” in the tai-chi either, but the two end fights are effective and intense. Often regarded as one of the last “old skool” kung-fu films, Yuen’s imagination and Yen’s agility compliment each other and, despite the hackneyed plot, this stands up pretty well.