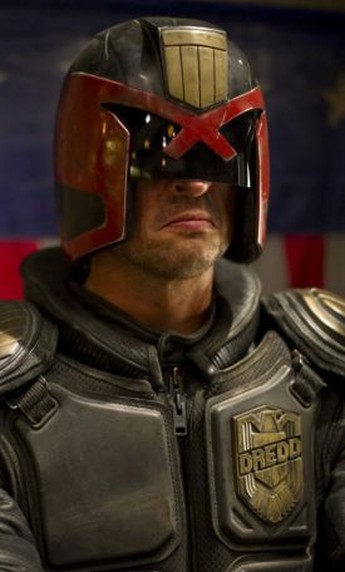 I didn’t hate the original, provided you took it on its own terms, and forgot all the social satire which peppered the comic version. Much the same can be said for this, which really feels more like a remake of the Stallone film, than anything going back to the source material. That said – and, once again, taken entirely on its own terms – this is surprisingly good, big-budget action cinema, which takes a simple premise and delivers the goods. Dredd (Urban) has to take out the rookie Judge Anderson (Thirlby) for a one-day assessment; she actually failed her academy tests, but her psychic abilities got her this shot. They investigate a triple homicide at Peach Trees, a 200-storey slum ruled by MaMa (Headey), a drug lord who has been pumping SloMo into MegaCity One, a street drug which does exactly that. When the case brings Dredd and Anderson too close to MaMa, she locks down the building with the Judges inside, and orders her minions to kill them: cut off from support, their only hope is to fight their way up to the top, and take out the boss.

Yes, it’s basically The Raid: Redemption with guns. Which is certainly not a bad thing, and Travis delivers a really nice visual style, both in setting the scene and in terms of the ultraviolence. I particularly was impressed by a gun-battle seen from the point of view of a person on SloMo, and a scene where MaMa and her henchmen let rip with some serious firepower: both were frickin’ awesome, and the throbbing neo-industrial soundtrack also deserves credit. Urban does the job, which is basically remaining an emotional rock, with Anderson being the emotional side – it was a wise move to provide him with a sidekick that could carry around the emotional baggage Dredd basically doesn’t have. However, as before, the social and political subtexts of the original series, e.g. Dredd’s fascist leanings, are basically absent. I can understand why, since such things would not exactly enhance commercial appeal; still, I can’t help missing them. That aside, and a feeling of somewhat repetitive pacing, especially in the second half, do not stop this from being acceptably crunchy and dark.