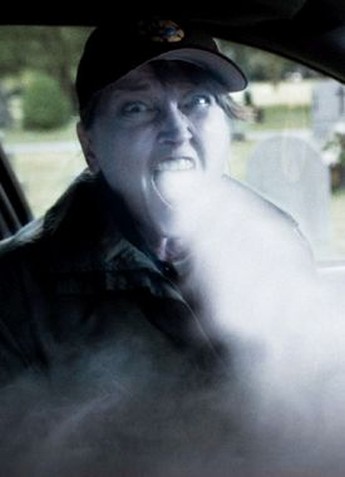 This is, of course, complete bollocks. A lightning strike in a cemetery on a remote island, unleashes the spirits of a number of pissed-off cultists, who committed mass suicide decades previously. Their souls take over the storm, which then roams the island, stalking all and sundry with tentacles of fog, that take over your body and cause you to explode into a shower of dust. Up against this peeved meteorological phenomena go a formerly-married couple, Ashley (Allen), who is now the local weathergal, and Hal (Bernard), the town cop, along with a conveniently-passing paranormal investigator. They have to figure out what’s going on, the connection to the town priest, and most importantly of all, how to stop it before the next town gathering is going to require nothing more than a vacuum cleaner with a really big dust-bag. Like I say: complete bollocks, but you would not expect anything else from a SyFy original movie.

That said, this is at least entertaining in its awfulness, and doesn’t hang around: people start getting killed within about five minutes (we learn that urinating on the gravestone over a cultist mass grave is probably not a good idea), and the deaths keep coming the rest of the way. I think my favourite was the attack that came out of a toilet bowl, causing the victim to explode in a shower of blood, rather than dust, for no reason that’s ever explained. Oh, and the fog growls as it makes its way through the town, and for souls belonging to people from the horse and buggy era, they’re really very savvy with technology, using mobile phones and computers with an ease which would suggest that a career in the tech support industry beckons. They’ve certainly got the bad attitude necessary. Mind you, we also learn that if you smash an ancient amulet which is the only thing that can stop the evil spirits… duct tape is the solution. Who knew?

The special effects are no great shakes, to say the least, but I can’t deny that we were constantly entertained throughout, though more through the contant potential for MST3K-ing it in a mocking tone, as genuine enthusiasm. It certainly deserves to be described as “never a dull moment”, though it also illustrates perfectly the yawning chasm between “never a dull moment” and “actually any good”. Still, if I had to choose between bad and boring, I’d happily pick the former any day, and if you’re looking for something with more cheese than a tin of Cheddar footballs, this hits the spot.